Selling 1-month options is a core principle in the BCI methodology for covered call writing. As interest in stock options has been growing exponentially so have the number and type of options products available. It’s all about supply and demand. Over the past two years we have seen the number of securities associated with options grow dramatically as well as the development of new products such as weeklys and mini options. In this article I will focus on weeklys, options with weekly expirations.

Weeklys are options that provide expirations every week. Standard weeklys are listed on Thursdays and expire on the following Friday. A weekly is not listed if it expires on the 3rd Friday of the month, the date that monthly options expire. In the last year a new program of weeklys has been initiated, called expanded weeklys, where trading is permitted in up to 5 consecutive weekly option expirations for stocks, ETFs, ETNs and indexes. Below is a screenshot of weekly expirations available for both standard and expanded weekly programs:

As of 12-13-13, the BCI team expanded our Premium Stock Reports to include those stocks that have passed our rigorous fundamental, technical and common sense screens that also have weeklys. This information is located mid-report in the running list as shown below:

The column highlighted in pink lists the stocks in our report that also have weeklys associated with them. I highlighted YNDX in the yellow row. Let’s have a look at the January options chain for YNDX: 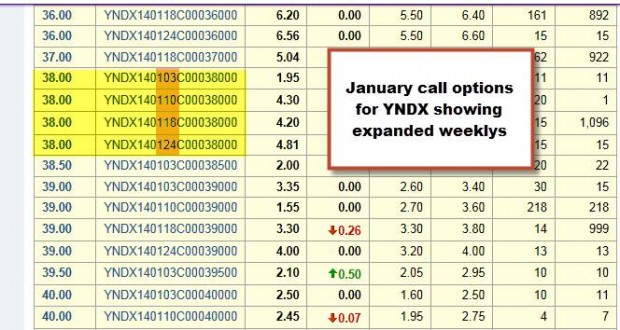 In the yellow field you will note 4 $38 strike prices. In the brown column one can see 4 distinct expirations: January 3rd, 10th, 18th (monthly) and 24th. YNDX was one of 15 stocks with weeklys on our Premium Stock Report. On our weekly ETF report, an additional 9 securities also had weeklys associated with them for a total of 24 securities with weeklys. Of the 15 stocks on the report dated 12-20-13, 14 were part of the expanded weekly program. Only LVS was part of the standard weekly program.

Options are in great demand and so the number and type of products available are expanding as well. Our focus is mainly on monthly options but weeklys will also have a place in the portfolio of many BCIers. It is critical to stay educated as to the opportunities available to us as shown in this article.

I was just notified that Amazon.com is running a 1-week sale on the kindle version of my first book, Cashing in on Covered Calls starting Sunday, the 29th of December:

The holiday-shortened week was generally a good one for the stock market. This was partly due to positive economic reports as well as the news last week  regarding the government fiscal and monetary policy along with Congress passing a budget deal.  Here is a summary of this past week’s economic reports:

Wishing you a safe and happy New Year and a prosperous 2014,