Weekly options (weeklys) are becoming an attractive choice for many covered call writers. These are options that expire every week rather than the more conventional monthly options. Weeklys are listed each week except that no new Weeklys are listed that would expire during the expiration week for regular options (the third Friday of each month), nor would they be listed if they would expire on the same date as a Quarterly option on the same underlying security. Other than SPX Weeklys (S&P 500 as the underlying security), closing times for Weeklys options match the closing times for regular, non-weeklys on the same underlying stock or ETF.

On Nov 15, 2013 U.S. options exchanges expanded the listing of weekly contracts from one expiration week to five straight weeks for a group of the most-actively traded options on stocks and exchange-traded funds. This known as the expanded weekly options program compared to the more well-known standard weekly option program. Most securities that appear on the BCI Premium Stock and ETF Reports are part of the expanded program. Both of our premium reports highlight which securities have weekly options associated with them.


The screenshot below shows a partial list of ETFs with weeklys as well as their participation in the standard and expanded programs: 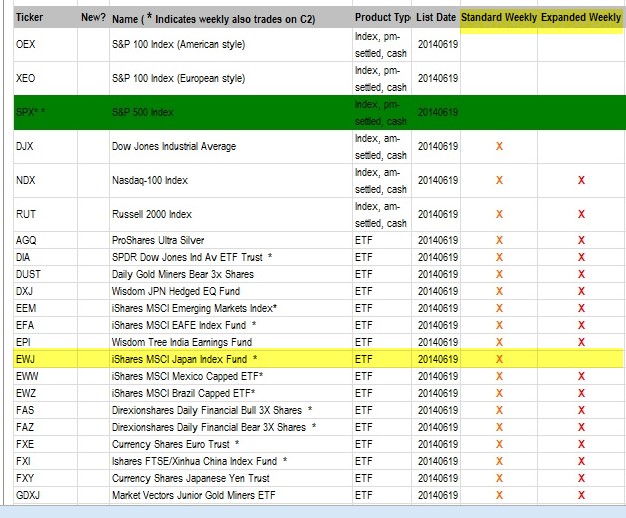 There are many ways to make money in the stock market and using Weeklys may be appropriate for some investors. My personal preference is still Monthlys but encourage those interested in Weeklys to paper-trade with them to see which time frame leads to your greatest success.

In addition to the mostly bullish economic reports I am about to summarize, the fact that corporations can borrow money at ultra-low rates to buy back stock shares, should continue to enhance earnings per share stats for our equities. Also, due to stronger 2nd quarter GDP growth, it is not unreasonable to expect a stellar upcoming earnings season:

← Happy Independence Day!
Calculating 2-Month Returns When Rolling Out And Up →