When Do We Sell Our Covered Call Writing Stocks?

Covered call writers know how important exit strategies are to our ultimate success. Position management skills must be activated when share price rises or falls dramatically and when dividends become an issue or when a strike is in-the-money as expiration of the contract nears. Using our 20%/10% guidelines assist us in defining when to close our short positions (options) as stock price falls but then what?

When our short options positions (called short because we sold the option) are closed and we no longer have an option obligation, the next step is determined by factors detailed in my books and DVDs such as time to expiration, overall market assessment, chart technicals and personal risk tolerance. In this article we will focus in on a situation that challenges so many covered call writers: when do we sell our stock after closing the options positions due to a price decline?  The task of making this decision is quite imposing for most retail investors for two reasons:

1- These stocks that have “let us down” were, in fact, great-performers recently. They’re bound to recover…right? Absolutely, just like Bear Stearns, Enron, Tyco and WorldCom (he said sarcastically). Cynicism aside, it’s understandable why so many of us hold out hope for such a security that has performed so well prior to the current contract month.

2- I respectfully submit that there is also a psychological component in play here as well. Nobody likes to take a loss and it’s not a “realized” loss until we sell the shares. So we tell ourselves that price recovery is right around the corner (did I mention Bear Stearns…). We’ve all experienced these feelings, especially me (years ago). We must train ourselves to react in a non-emotional manner.

Stock price is declining and we close our short options position…now what?

We must check for news updates related to the company. A reliable FREE site for accessing stock news is:

If the news is egregious like corporate fraud or the loss of a key contract, we must close our long stock position and use the cash to enter a new covered call trade. Yes, realize the loss and move on.

Now for the key aspect of this article

When there is no news available to explain the decline, I compare the price action of the security in question to that of the S&P 500. If the stock is significantly under-performing the overall market, realize the loss and exit the trade. If not, rolling the option or waiting to “hit a double” are two strategies still in play.

All four experienced price declines during the January contracts and began dropping off our weekly ‘running list” Below is a 1-month price chart of these four securities and that of the S&P 500: 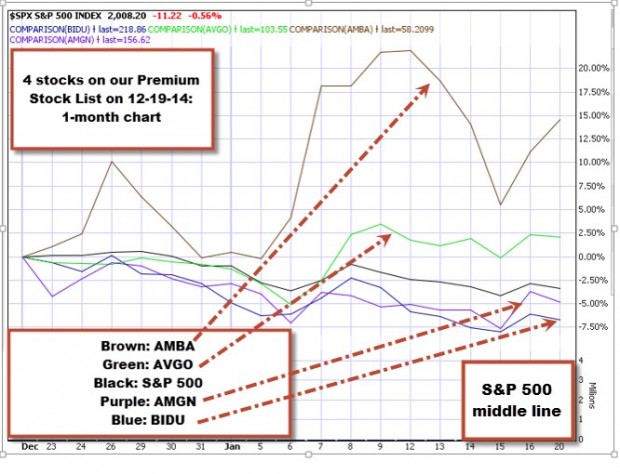 AMBA: Brown line never broke below the S&P 500 so I’m more likely to stay with this stock

AVGO: Mirrored the S&P 500 (very slight dips below) and then moved above it in early January. Here, I’m also more likely to keep this security

AMGN and BIDU (purple and blue): Both securities under-performed the overall market for the entire contract month. If we reached the 20%/10% threshold, I am more likely to realize those losses and use the cash generated from the sale of the stock to move into a new covered call trade.

We are most likely to close our long stock positions when the 20%/10% thresholds are approached and either there is negative news reported that makes this a dangerous position to stay in or the security is under-performing the overall market. No one approach will generate positive results 100% of the time but we, as Blue Collar Investors, constantly strive to follow rules and guidelines that will dramatically throw the odds in our favor as we weed out the Enrons of the world.

The World Money Show Orlando, February 6, 2015 at The Gaylord Palms

(I am an invited speaker. The Money Show is charging an admission fee to attend).
Alan’s article published in the January edition of the AAII Journal

(Letter from a coaching student):

BCI: Cautiously bullish but selling an equal number of in-the-money and out-of-the-money strikes as a hedge against recent market volatility

23 Responses to “When Do We Sell Our Covered Call Writing Stocks?”