Stock options are contracts with terms that can change prior to expiration. Mergers, acquisitions, special dividends and stock splits are some of the events that may necessitate the change in terms. Since early September, New Orient Edu&Tech (EDU) has been on the Blue Collar Premium Stock List. In the middle of September I received several emails from members wondering what happened to the strike prices they sold. Several members had sold the $21 call options and wanted to buy them back prior to expiration but they no longer existed…They were gone!

EDU had issued a 1-time special cash dividend of $0.35 per share with an ex-dividend date (date you must own the shares to capture that dividend) of September 4th and payable on October 7th. Here is the information gleaned from the CBOE site (www.cboe.com):

The dividend would be earned by all who held ownership in the shares on September, 2013. Whenever a dividend is distributed the price of the stock will decrease by the amount of that dividend because the company will have that much less cash and therefore be worth less. In order to make buyers and sellers of calls and puts “whole” after the price change, adjustments are made in the contract terms. In this case the strike prices were adjusted down by the dividend amount as shown below:

The row highlighted in yellow shows the change in the $21 strike price to $20.65. As covered call writers, although the price of our shares will technically decline in value, we will, in fact, capture the dividend on October 7th to make us “whole”

To retain ownership of the shares and to roll the option, a covered call writer would then buy back the $20.65 and re-sell that or another next month strike. The chart below shows the short-term price dip around the time frame of the ex-dividend date and the performance of this equity since that time: 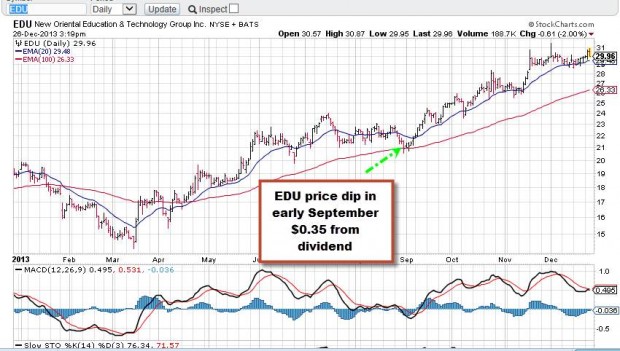 The price dip was partially due to the special dividend.

When we see that a strike price we had previously sold no longer exists, it is usually due to an event that caused the Options Clearing Corporation (OCC) to change the terms of that option. The changes are made to make investors on both sides of that trade “whole” The best action to take is to call your broker or check the CBOE site or a similar one to learn the new parameters of the contract.