Buy A Stock And Wait Before Selling The Option: Is This A Good Strategy?

The goals of covered call writing include generating monthly cash flow and preserving capital. We use every fundamental, technical and common sense principle available to maximize our profits and protect our cash. Paul A. recently sent me an excellent question that motivated this article:

“…if the market has a down day and drags down the price of the stocks I am interested in, is it reasonable to buy the stocks and wait a few days in hopes the market will tick back up and allow me to generate higher option returns”

You can tell from the inquiry that Paul is a seasoned investor. Frequently, the overall market direction will cause a price decline in outstanding performing stocks and should the market recover, these elite stocks should come back with a vengeance. Let’s first list the three things that can happen to the share price after the long stock position is entered:

The price goes up

Paul’s strategy works like a charm. The price increase leads to an increase in option premium and the trade turns out more profitable than had the option been sold when the shares were purchased.

The price goes down

This time the strategy does not have a happy ending. The option premium generated will be less and in some cases we may have to write for a lower strike price in order to generate the returns required by our initial goals (2-4%/month in my case). I addition to that, we have capital depletion due to a lower share value. Exit strategy execution should help mitigate losses.

The price stays the same

On the surface it may appear that in this situation there is no harm, no foul but that’s not the case. Despite the fact that the price remains the same, the option value will decline in value (assuming implied volatility remains the same). This is because of theta or time value erosion of the option premium. Every day that passes will result in time decay of the option premium and that decay will accelerate as we move later into the contract. Theta is not linear, it is logarithmic and starts off slow and then eventually “falls off a cliff”.  Here is a graph showing theta’s impact on the time value of an option premium: 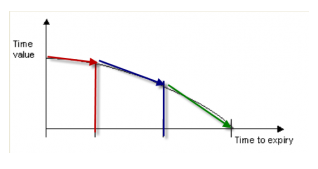 In 2 of the 3 scenarios, we lose. These are odds I try to avoid. By selling the option at the time we purchased the security, we will generate the returns that meet our goals or we would not have selected that underlying. That being said, there are tactics we can employ to take advantage of this situation without incurring the risk suggested. We do survey the overall market and, if bullish, we can favor out-of-the-money strikes. What this accomplishes for us is that we generate the initial profit that meets our goal and then have the opportunity for an additional income stream from share appreciation up to the strike price. For example, if a stock price had dropped from $30 to $28 and we purchased it at that lower price, we can immediately sell the $30 out-of-the-money call. Let’s assume we generate $0.90 per share or $90 per contract for an initial 1-month return of  3.2% Not bad so far. Now, since we are bullish on price movement (inherent in Paul’s question) we anticipate a price increase. If the price does move up to the $30 strike, we generate an additional $2 per share or $200 per contract. In this scenario our total 1-month profit is $290 on a cost basis of $2800 or a 10.4% 1-month return.

After a market decline and shares are purchased at a lower price, it is to our advantage to immediately sell the option to generate our target goal. If we are bullish on the overall market anticipated movement, we can take advantage of that situation by favoring out-of-the-money strikes. This way we are guaranteed our initial target returns and have an opportunity to take advantage of a market recovery. Of course, we always are prepared with our exit strategies if any trade turns against us or turns out much better than expected.

As we recover from the extreme winter conditions this economy has endured, market expansion is picking up:

BCI: Moderately bullish on our economy but keeping a defensive posture due to geo-political concerns and favoring in-the-money strikes 2-to-1

Happy holidays to one and all,

9 Responses to “Buy A Stock And Wait Before Selling The Option: Is This A Good Strategy?”

← The Role Of VIX and Market Volatility In Our Covered Call Writing Decisions
Vega: An Option Greek And How It Impacts Our Option Pemiums →