When studying option trading basics, we learn that options expire on the third Friday of the month. In the BCI methodology we sell mainly 1-month stock options. When we view an options chain we see several other expirations available. However, they are not the same for each security Everyone likes when things make sense. Understanding why things are the way they are it has a calming effect on us. When we look at the different expiration months available in our stock options, an explanation is required and demanded by the curious investor. It makes no sense at all! Different stocks have different expiration months! How can that be? We want uniformity, not chaos. Like most things, there is a reasonable explanation.

All options are defined by an expiration month and date (the 3rd Friday of the month except for some quarterly and weekly expirations of some securities) after which the contract becomes invalid and the right to exercise no longer exists. When options began trading in 1973, the CBOE (Chicago Board Options Exchange) decided that there would be only four months at a time when options could be traded. Stocks were then randomly assigned to one of three cycles:

This proved to be a workable concept until options gained in popularity and there was a demand for shorter-term options. In 1990, the CBOE decided that each stock (with options) would have the current and following months to trade PLUS the next two months from the original cycle (hope your head isn’t starting to spin). Let’s simplify things by looking at the chart below:

If the current month is January, we see that all options are available for both the current (January) and next month (February). The last two option expiration months available will depend on their original placement in one of the three cycles:

Now if your head has stopped spinning and you’re feeling a bit better, I ask you NOT to put away the Tylenol, at least not yet! Here come the LEAPS (Long term Equity Anticipation Securities) which are options with longer term expirations. Only heavily traded securities like Microsoft have these types of derivatives. These equities will have options with more than four months of expirations, some up to seven months. LEAPS can further complicate these cycles but that’s a discussion for another day. Suffice it to say that a vast majority of stock options will fall into the four month cycle.

Those of you following the Blue Collar System of selling predominantly 1-month options need not be concerned about those dates further out. However, intelligence does breed curiosity and many of you have “peaked” ahead and wondered what was up. Now we know so it’s back to generating cash by selling covered call options.

Below are the 20 classes selected for the pilot along with the expiration month(s) that were added:

The pilot program ended and was NOT extended. However, the securities that were originally part of the program still maintain those additional expiration months.

May 8th: I will be the keynote speaker for the Long Island Stock Traders Meetup Group. I will present a basic review of covered call writing and then proceed with an audience participation section where your favorite stocks are analyzed for potential covered call trades:

I was honored to meet many of our BCI members when I was the keynote speaker for the AAII-Atlanta April meeting. Many of you traveled quite a distance. I appreciate your loyalty and support.

Last week, this site, although still bullish on our economy and overall market outlook, took a more conservative position (favoring in-the-money strikes) due to the increased volatility of the VIX. A 3-month chart of the VIX and S&P 500 shows that the market benchmark is up 5% while the VIX has calmed to an encouraging 17.44. However, in the current month, the VIX has had several swings of 10% -15% and that concerns this conservative investor. The chart below demonstrates these points: 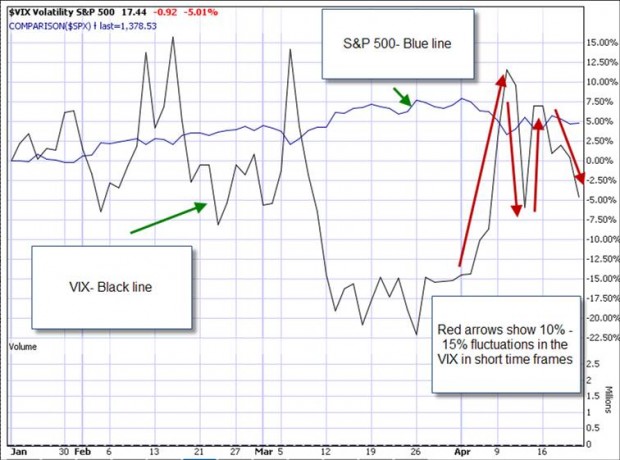 Posted on April 21, 2012 by Alan Ellman in Option Trading Basics