Selling cash-secured puts allows us to generate a monthly cash flow by undertaking the option obligation. There are many occasions when we can enhance these returns to even higher levels using our position management skills. This article will highlight several put-selling trades executed in the same contract month by one of our members, Dan of Minnesota.

3/11/16: Bought back 1 contract of $27.50 SFM MAR 16 PUT at $0.35
3/11/16: Sold 1 contract of $32.00 NVDA MAR 16 PUT at $0.56
3/16/16: Bought back 1 contract of $32.00 NVDA Mar 16 PUT at $0.16 (prior to Fed announcement)
Trades that meet BCI guidelines
On 3/2 and 3/4, the short put positions were closed using the BCI 20% guideline. This is based on share appreciation leading to decline in put value as puts have negative Deltas (as stock price rises, put value decreases). Also, on 3/16/16, Dan closed his put position prior to the Fed announcement which he treated like a risky event. This is not unlike our earnings report rule. Great work by Dan.
Trades that veer from BCI guidelines
On 3/3 the put was sold just prior to an earnings announcement. We got lucky as there was a positive surprise. We should avoid these risky situations. On 3/11 the short put was bought back when put value declined to 64% of its original value…a pricey maneuver. This was followed by a put sale of $0.56, leaving a credit of $0.20, less commissions.
Final results 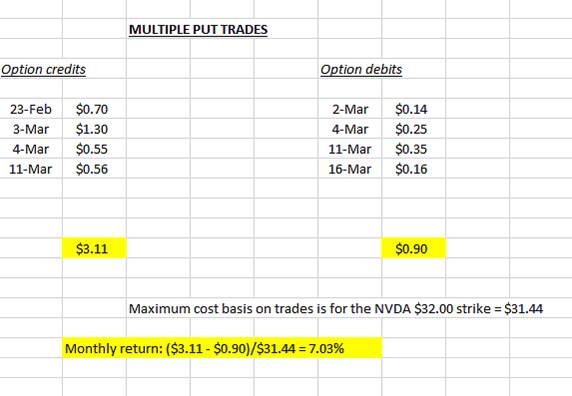 Global stocks were up this week as recession concerns eased and the US Federal Reserve signaled it expected to hike rates at a more gradual pace. The Chicago Board Options Exchange Volatility Index (VIX) fell to 14.01 from 17.1 last week. This week’s reports and global news:

Coming up next week

Click here to cancel reply.
← Delta and Theta and their Impact on our Covered Call and Put-Selling Positions
Comparing Implied Volatility and Historical Volatility During Earnings Season →