Delta And The Moneyness of Options

Understanding and mastering the Greeks are key factors in becoming an elite covered call writer and put-seller. In this article, I will focus on delta, one of the important Greeks, as it relates to the moneyness of options (in-the-money, at-the-money or out-of-the-money). Let’s start with a review of a few definitions:

Greeks: They are numbers generated by mathematical formulas resulting in ways of estimating the risks associated with options, such as the risk of the stock price moving up or down, implied volatility moving up or down, or how much money is made or lost as time passes.

Delta: The amount an option will change in value for every $1 change in share price. The greater the chance of the strike ending up in-the-money, the greater the delta. Delta values run from 0 to 1.

Moneyness of options: Describes the relationship between options strike price and the price of the underlying security and determines if intrinsic value exists in an option.

On page 164 of the Complete Encyclopedia for Covered Call Writing, Figure 70 shows the relationship between the moneyness of options and delta: 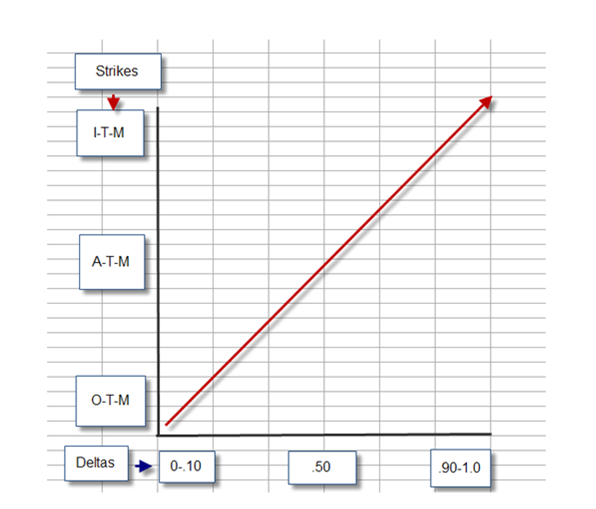 Delta and the moneyness of options

The 20/10% guidelines are among the most important BCI principles relating to position management for covered call writing. It sets a guideline as to when to  buy back an option (close the short option position) when the price of the underlying security drops in value. Since we generate more total premium (not necessarily more time value) for an in-the-money strike, the fact that the delta is higher than for an out-of-the-money strike, premium value will erode faster due to delta and allow us to close the short position in a timely manner should share value decline. The smaller total premiums generated from at-the-money and out-of-the-money options will erode slower also due to delta and therefore keep us from closing our positions too soon.

Why aren’t the deltas for exactly at-the-money strikes exactly .5?

This is more a point of interest rather than a concept that will influence our trading strategy. Generally a call option will have a delta slightly greater than .5 for an exactly at-the-money strike and a put option will have a delta slightly under .5 in that scenario. This relates to interest rates which make the call more valuable as option buyers can control shares of stock at a lower price and leverage the “saved” cash to earn interest. The greater the time until expiration, the greater the call delta will be in relationship to the put delta. Again, this is an interesting (perhaps not?) fact and I present it to you in case you get an options question on Jeopardy (even Alex wouldn’t know this one!).

The impact of delta, which erodes the value of pricier in-the-money strikes quicker than cheaper out-of-the-money strikes, is responsible for allowing the BCI 20/10% guidelines to have universal application for all strike prices.

Monday May 18th…click for details.

I will be focusing on covered call writing but will also provide a segment on selling cash-secured puts.

BCI: Cautiously bullish and using an equal number of in-the-money and out-of-the money strikes. The triple digit moves in the market are a bit unsettling and keeping this conservative investor from taking a more aggressive stance.

15 Responses to “Delta And The Moneyness of Options”