Can we use covered call writing and selling cash-secured puts to generate profits when share price declines by 10% in two months in a bear or volatile market environment? I am writing this article on January 5th, 2015, the worst day the market has experienced in  over three months. This hypothetical trade represents an unscientific study based on a real-life options chain and many of the BCI guidelines and rules. Here are the assumptions for this 2-month trade:

With the price of KORS at $73.11 near market close on 1-5-15 this is the real-life options chain for the 6-week February expiration: 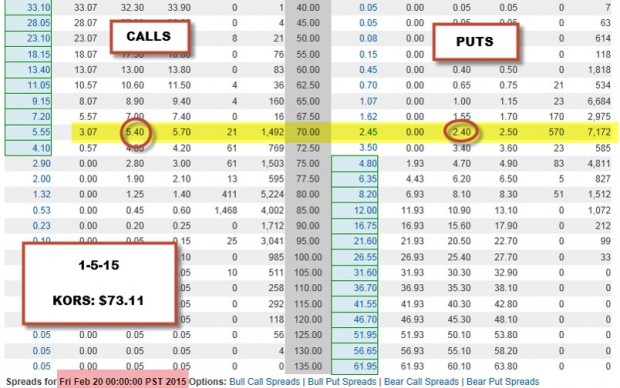 Since we are concerned about current market conditions, we will start by selling an out-of-the-money cash-secured put and converting the 6-week return into a one-month return. With KORS trading at $73.11, the $70 out-of-the-money put generates $2.40. Let’s take off our shoes and socks and do the math:

What is our cost basis?

Let’s calculate without using time value profit to reduce our cost basis (don’t do this for tax purposes!). Shares were put to us at $70 and the intrinsic value of the call premium “bought down” our cost basis to about $66. This is very close to the current projected price of $65.97. Our two-month profit is 2.6% +  2.36% = 4.96% which annualizes to 30%. Now, even if the numbers fall less favorably for us, we still have plenty of room for a palatable outcome in a bear market environment.

Option selling can result in monthly profits even in bear and volatile market conditions. Thios article, although unscientific in nature, represents some general points to support this conclusion.

The World Money Show Orlando, February 6, 2015 at The Gaylord Palms

What’s up with all this market volatility? As I have been reporting since March of 2009, the economic reports have shown signs of recovery and expansion. In the past year, we have seen four spikes in the VIX that make conservative investors like us uneasy. Another spike occurred this month but why? US economic reports continue to show bullish signs on the economy , lately even with jobs growth. Investors are always looking for reasons to be nervous, after all, we’re risking our hard-earned money. Global weakness is a valid consideration as is uncertainty exacerbated by terror attacks in France and the tenuous status of the Euro. One of the reasons, in my view, volatility has reared its ugly head is that economists and investors are not sure how to interpret certain measurable changes. For example, oil prices have been dwindling dramatically…good or bad? Will it lead to regional weakness and impact certain nations negatively thereby having a bearish influence on the global economy? Or will it put additional cash in the pockets of consumers allowing them to enhance the economy to even higher levels? Bulls interpret one way, bears the other. Volatility spikes and then it subsides. Same thing with low interest rates and low inflation…good or bad for our economy? So while the market is making up it’s mind, I am taking a cautious approach with my positions but remain bullish on our economy as I have been for the past 5 years…just one man’s opinion.