In my book, Stock Investing for Students, I develop a long-term investment plan to achieve financial independence and an early retirement. The plan is initiated by using broad market index funds. This article will highlight the reasons why I favor passively-managed mutual funds to their actively-managed counterparts. First, some definitions.

Index fund: A type of mutual fund with a portfolio constructed to track the components of a market index like the S&P 500. It provides broad market exposure at low cost.

Actively-managed mutual fund: Active managers rely on research, forecasts, and their own judgment and experience in making investment decisions on what securities to buy, hold and sell.

The case for indexing

In the long-term, it is virtually impossible for actively-managed funds to out-perform the “market” due to fees and costs. Approximately 75% of mutual funds under-perform the benchmark they are attempting to beat. To a great extent, much of this is the result of the high fees paid to fund managers and the greater rate and costs of the transactions. Index funds and index ETFs represent 30% of the market assets but only 5% of market trading.

Actively-managed funds charge fees greater than 1% while index funds average about 0.10%, more than ten times less. When computing the math regarding fees, we should calculate costs as a percentage of returns rather than total assets to get a clear picture of the damage high fees impact our net worth. Let’s assume the market returns an 8% annualized return and that actively managed funds can achieve similar results (most cannot). In doing the math, we will assume a cost of 0.10% for index funds and 1.2% for actively-managed funds. Okay, put on your seat belts:

Keep in mind that these stats assume the actively-managed funds can achieve broad market results which most cannot.

In the 4th quarter, 2016 I did a comparison of the KIP 25 (25 no-load actively-managed mutual funds recommended by Kiplinger Advisors at the end of 2015) to the Vanguard S&P 500 Index Fund. Please note that no position management was included and all positions were held for one year. Here are the results: 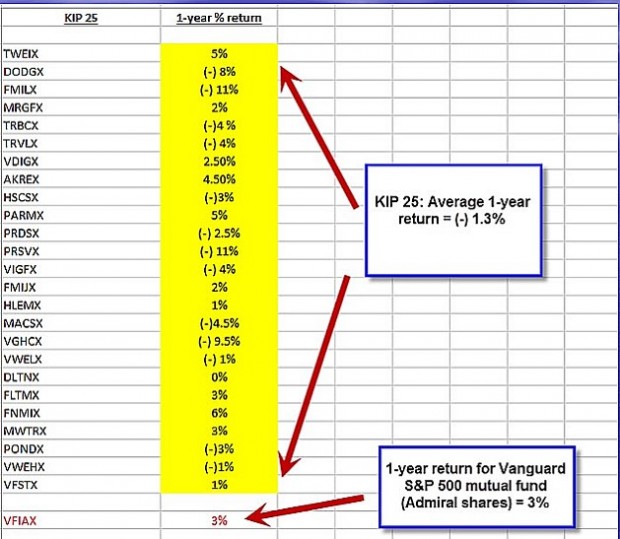 Why not choose funds that have out-performed?

It is impossible to predict future results based on past performance with one very important exception. Managers that charge lower fees tend to out-perform.

The most important factor in the long-term success of investing with mutual funds is the cost or expense ratio. This, along with other factors, give index funds a distinct advantage over actively-managed funds.

Global stocks were flat this week, but there was significant volatility midweek as political chaos exacerbated in Washington. West Texas Intermediate crude oil rose to $50.30 a barrel from $47.50 last week amid signs OPEC and major producers such as Russia will retain output curbs through March of 2018. Volatility, as measured by the Chicago Board Options Exchange Volatility Index (VIX), jumped as high as 15.50 at midweek before dipping back to 12.04 on Friday. The VIX began the week at 10.80. This week’s reports and international news of importance:

BCI: This week’s volatility and continuing political bombshells out of Washington have muted my aggressiveness moving forward. I will be taking on an equal number of in-the-money and out-of-the-money strikes for the June contracts.

23 Responses to “Indexing: A Key Component to Successful Long-Term Investing”

Click here to cancel reply.
← Is Covered Call Writing a Zero Sum Game? Let’s Do the Math
Setting Up a Covered Call Trade by First Selling an Out-Of-The-Money Put →