Technical analysis is an integral part of mastering covered call writing. This week’s article is a follow-up to an article posted on October 19th. In this week’s column I will discuss the MACD histogram which represents the difference between the MACD indicator and its trigger, the 9-d EMA (exponential moving average). It is plotted in the form of a histogram (bar graph) rendering divergences and centerline crossovers easily identified.

The chart below depicts both bullish and bearish MACD Histogram signals:

Bullish signals are highlighted by the blue arrows where the histogram bars move above zero and the price of the stock then rises Bottom half of chart). Bearish signals are noted by the red arrows where the bars drop below zero and the price of the equity then declines. It is important to note that these histogram signals occur before the MACD itself (black line) moves above or below zero. This is why I prefer the histogram…it is a quicker indicator of change.

How to use the MACD Histogram: 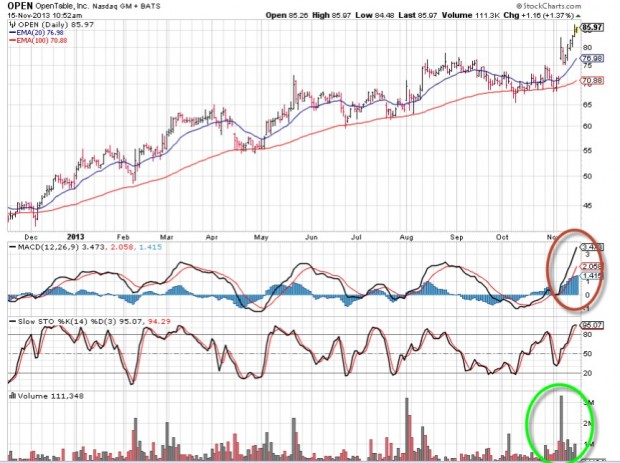 Advantages of the MACD Histogram:

MACD and the MACD Histogram are two of the more reliable technical analysis tools available to us. They incorporate both trend-following and momentum identifying qualities and are predictive in nature. As with other technical tools, they should be used in conjunction with other indicators to assist in painting a picture for potential buy/sell decisions.

The market reacted favorably to the Federal Reserve’s chief candidate Janet Yellen comments supporting the Fed’s recovery efforts. That aside, it was a light week for economic reports: