Mini Options for Equities and Exchange-Traded Funds: A Failing Product

Standard covered call writing contracts consists of 100 shares deliverable. When we sell one standard covered call contract we are agreeing to sell (deliver) 100 shares. Since many retail investors lack the capital to first buy 100 shares of expensive underlying securities or even the options themselves, new products known as mini options were created.

Mini options are an options class that carries a deliverable of 10 shares of the underlying with similar strike prices and expirations as the standard contracts. Initially, there were 5 equity/ETF underlyings:

How are minis different from standard options?

I wrote an article on these products before they were initiated and expressed my concern for trading commissions per share. My hope was that brokerages would reduce standard trading commissions so they wouldn’t have a major negative impact in our option-selling profit…they did not. 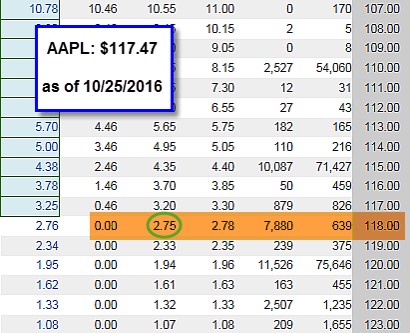 Calculations for the standard options contract

Calculations for the Mini options contract

The impact of the commissions reduced the initial profit by 71%

The creation of equity mini options was doomed to failure because of the impact that trading commissions have on the bottom line. In essence, we are paying ten times the commissions per share with minis. This is an unworkable scenario. As a result, GOOG has stopped trading Minis and option liquidity is extremely low and in some cases non-existent for the other underlyings. I see no way for these products to be sustained and expect them to disappear in the near future.

Alan will be interviewed on Benzinga Pre-market Radio Network regarding the best strategies to use in the current market environment.

Information and link to register

39 Responses to “Mini Options for Equities and Exchange-Traded Funds: A Failing Product”

Click here to cancel reply.
← When Do We Keep a Stock that has Declined in Value?
Probability Analysis when Using Covered Call Writing or Selling Cash-Secured Puts →