Moneyness of Options: Why Call and Put Premiums for the Same Stock, Strike and Expiration can be so Different/ CONTEST DEADLINE IS NOVEMBER 30th

Option trading basics teaches us that the concept of put-call parity means that for every call option price, the corresponding put option (same stock, strike and expiration) will have an implied value. For example, if Company BCI is trading at $50.00 per share, if the $50 call option generated $1.50, the put option would also be expected to generate $1.50. The reason for this is that if there was a movement away from this parity there would be an arbitrage opportunity where one option could be bought and the other sold for a risk-free profit.  Now this concept applies to European style options. Since, in reality, we are dealing with American style options, dividends and interest rates need to be factored in. As an example, if the $50.00 stock had an ex-dividend date prior to expiration and the dividend amount was $1.00, the call option would be worth less and the put option more because share price will drop by the dividend amount on the ex-date. This will impact calls negatively and puts positively.

The “moneyness” of options

Another factor that impacts the value of the option premiums is the “moneyness” of the option or the relationship between the strike price and the market value of the stock. In the example below, Taser Intl Inc. (TASR) was trading at $30.90 on 7/24/2015. That would make the $31.00 strike very close to at-the-money. But what about the $30.00 strike? Well that strike is in-the-money for calls and out-of-the-money for puts. From this perspective we would expect the call option to be more expensive because of the intrinsic value component. Let’s view an options chain to make this concept come alive:

Let’s first look at the $31.00 strike price (brown row) which is very close to at-the-money. The blue arrows highlight the fact that the option-pricing is the same thereby confirming the following put-call parity rule:

If there was a disparity between the put and call premiums at this strike it would set up an arbitrage opportunity for market makers to take advantage of and generate a risk-free profit…not fair to us.

Put-call parity is an important concept in option pricing as it prevents unfair arbitrage opportunities. If these opportunities did present themselves, it would benefit market-makers, not us. There are factors that would create a discrepancy between the same strike prices for the same stock and expiration. These include interest rate factors, dividends and the moneyness of options. Understanding these concepts will elevate us the elite status as covered call writers and put-sellers.

Click on this link for our contest video and entry form.

“With the economy getting back on its feet, I think the markets will see more consumer confidence. With the potential rate hike everyone seems to be talking about though, it might suffer a minor setback. I think it will rise but a conservative rise”.

Thanks for the great response we’ve had to this event. Keep those entry forms coming. We allow two per email address and the deadline is MONDAY November 30th.

All files in the “Resources/Downloads” section of the Premium site have been updated and dated as shown in the screenshot below: 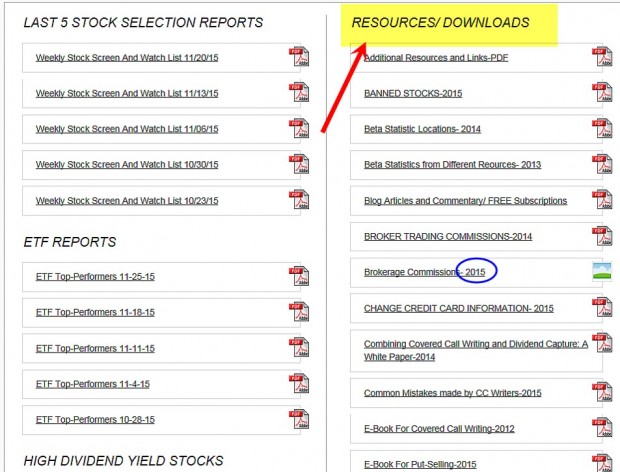 Markets were tranquil during this holiday-shortened week, as US economic data were predominantly positive and investors seemed more accepting of a rate hike in December. However, Chinese stocks fell on Friday, as investors grew nervous over officials’ efforts to regulate brokers. The Chicago Board Options Exchange Volatility Index (VIX) traded near a calm 15, down from 20 in recent weeks. This week’s reports:

BCI: Same stance as last week: Cautiously bullish using an equal number of in-the-money and out-of-the-money strikes. I remain fully invested using 50% in-the-money strikes until the Fed makes its position on interest rates known and evaluating the ensuing market reaction. I believe that most institutional investors have factored in a 25 basis point rate hike with moderating guidance from the December Fed meeting.

20 Responses to “Moneyness of Options: Why Call and Put Premiums for the Same Stock, Strike and Expiration can be so Different/ CONTEST DEADLINE IS NOVEMBER 30th”

← Rolling Down with CALM: Turning Losses into Gains
Can We Use Deep-In-The-Money Puts to Buy a Stock at a Discount? →