There are certain fallacies and deceptions associated with covered call writing as there are with all investment strategies. I am the first to say that there is no one strategy right for every single investor. We must master the pros and cons of each strategy to determine if it is right for our families. This includes rejecting information that is inaccurate and misleading. In this article, I will address and clarify the reality of the five most common of the covered call writing myths.

Please do not fall for this one. This would be the tag line for a late-night TV infomercial. At 2 AM we see John (in black and white with a scowl on his face) working eighty hours a week and still not earning enough money to support his family. Then he starts selling high-premium covered calls and subsequently shown with a smile and in color working five hours a week. By 2:15 AM he is at the side of his Olympic-style swimming pool adjacent to his multi-million dollar mansion sipping on a pina-colada. All you have to do is sell those 100% annualized return call options. The truth is that high-premium options are associated with high risk underlying securities. Option sellers are getting paid more to undertake more risk. Most of us selling covered calls are conservative investors with capital preservation a top priority and therefore should AVOID these options, not embrace them.

If you don’t know what you’re doing, any strategy will under-perform. From a more positive vantage point, we can succeed at most conservative strategies if all aspects are mastered. Covered call writing is considered by many the most conservative option strategy. There are three required skills needed to succeed and out-perform: selection of the underlying security, selection of the most appropriate option and position management. If all three of these skills are mastered, we should out-perform all normal market benchmarks.

Myth 3: Assignment of our shares is an unacceptable likely outcome

I’m getting angry just typing these words. If there are tax issues there are ways of circumventing assignment. Let’s assume no tax issues for this segment. Those using this strategy have clearly defined goals: income generation, limited downside protection by the option premium and willingness to sell the shares at the strike price. All these goals can easily be met whether shares are assigned or not. This relates to our three required skills including position management. Share assignment can be avoided more than 99% of the time if that becomes one of our goals. The truth of the matter is that we are generally concerned about the cash invested in a stock, not the stock itself when using traditional covered call writing (as opposed to portfolio overwriting). Furthermore, if you subscribe to the BCI rule that we never sell an option if there is an upcoming earnings report, we are never in a particular stock position for more than two months in a row. This is why we highlight stocks with upcoming earnings reports in our Premium Watch Lists.

Myth 4: We are forced to sell winners and hold on to losers

Now I’m really boiling. Let me go throw some cold water on my face…okay I’m back. No one forces us to do anything. We are (almost) completely in charge, unexpected early assignment being the RARE exception. Even if early assignment does occur, we can always buy back the stock if it is in our best interest. We can hold on to winners if the strike is in-the-money by rolling the option. We can and should sell a loser, especially one under-performing the overall market. One of the advantages of covered call writing is the incredible amount of control we have in the outcome of our investments. Those who allow this myth to become a reality will also subscribe to Myth 2.

Myth 5: We should use covered call writing because 90% of all options expire worthless

This claim misstates a statistic published by the Chicago Board Options Exchange (CBOE), which is that only 10% of option contracts are exercised. But just because only 10% are exercised does not mean the other 90% expire worthless. Instead, according to the CBOE, between 55% and 60% of options contracts are closed out prior to expiration. In other words, a seller who sold-to-open a contract will, on average, buy-to-close it 55-60% of the time, rather than holding the contract through expiration.

So if 10% of options contracts end up being exercised, and 55-60% get closed out before expiration, that leaves only 30-35% of contracts that actually expire worthless as shown in the figure: 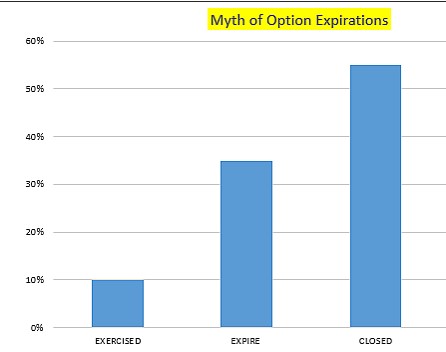 There are many reasons to consider using covered call writing but buying into the myth that 90% of options expire worthless should not be one of them.

Just because we hear something over and over again does not make it fact. Politicians use this ploy all the time. As Blue collar Investors, it is our responsibility to discern fact from fiction.

A disappointing monthly jobs report indicated unexpected weakness in the US economy caused a downturn in the market early Friday. This dramatically turned around by the close of the trading week. Global stock indexes were volatile due to weaker signals from two of the world’s largest economies. Wednesday marked the end of the third quarter, the worst for US stocks in four years, with the S&P 500dropping by 6.9%. International stocks performed much worse. This week’s reports:

BCI: Maintaining a cautious but fully-invested portfolio of in-the-money calls and out-of-the-money puts.

19 Responses to “Myths and Misconceptions about Covered Call Writing”

← Calculating the Greeks Using an Options Calculator
Mergers and Acquisitions: Part I- All Cash Mergers →