Over-Trading Our Option Positions: Good for Brokers, Not Good For Us

Exit strategies for covered call writing are essential for achieving the highest levels of success. In the BCI methodology, we have a series of guidelines that assist us in determining which position management techniques should be instituted and when we should consider them. Not taking appropriate action when responses to changes in our stock and option positions are required will significantly impact our final returns. But so too will over-reacting and executing more position management trades than necessary. In today’s article, I will highlight a real-life classic example of over-trading shared with me by a premium member. Let’s call him Alan (I like the name).

Alan’s goal is to generate cash flow by selling out-of-the-money call options but his main priority is not to have shares sold. Defensive trade executions occurred when the strike moved in-the-money and when there was an ex-dividend date approaching. These trades have resulted in a net debit on the option side and an extension of the option obligation two months out from the last trade.

What is the profit and loss to date?

Exploring the details to better manage these trades

This series of trades was initiated on 7/21/2016, five days prior to an earnings report which was responsible for the “surprise” bump in price as shown in  the screenshot below:

Alan’s ex-dividend date is valid but not a huge concern since the expiration date of the current option at the time (9/16/2016) was not close to the ex-date (8/4/2016). Early exercise in these scenarios are super-rare.

Concern for early exercise every time a strike dips in-the-money is also not a major concern until we closely approach 4 PM ET on expiration Friday. This is because the option holder generates intrinsic value only and leaves the time value component of the option premium “on the table”. Stated differently, the option holder would make more money selling the option prior to expiration.

We can break the answers into three categories:

Buy the stock after the report or if we want to own the stock long-term, write the call after the report passes. This will allow us to benefit from a positive report and then an out-of-the-money call more appropriate for the post-report market price.

Write the call the day after the ex-date or write a 2-month call moving expiration much further away from the ex-date.

We must have a firm understanding when and why early exercise may occur. It is extremely rare. Rolling is mainly for in-the-money strikes near expiration Friday and certainly not every time a strike moves in-the-money.

I’ve certainly done my share of over-trading. I’ve never viewed these micro-management exercises as mistakes but rather as learning experiences that made me a better trader. The good news for Alan is that he has learned valuable lessons while still making a profit. I’ll bet that next time, Alan’s profits will be even higher than they are now.

For more information on exit strategies for covered call writing

The BCI team is proud and humbled to announce that The Blue Collar Investor was recently selected by Feedspot as one of the top 100 stock blogs on the internet. 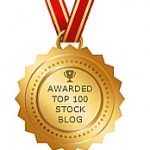 A flow chart summarizing the entire strategy is currently available in the “resources/downloads” section of the member site (scroll down to “P”). I suggest you download the chart and use it as reference when viewing the webinar.

Premium members login to the member site and register here: 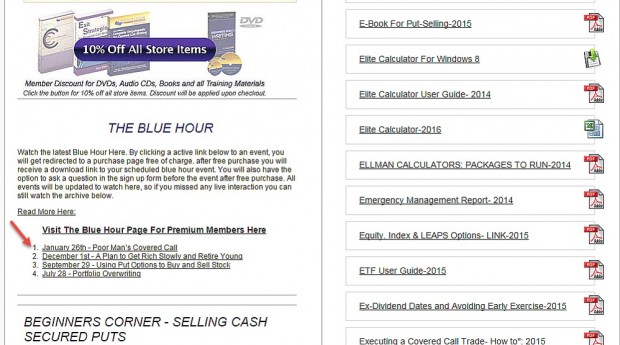 Global stocks extended gains this week as US corporations started the 4th quarter earning season with positive results. West Texas Intermediate crude dropped to $53 a barrel from $53.90 a week ago. The Chicago Board Options Exchange Volatility Index (VIX) was steady at 11.28. This week’s reports and international news of importance:

US financial markets are closed for Martin Luther King Jr.

BCI: I am currently fully invested and have an equal number of in-the-money and out-of-the-money strikes. I remain cautious as we enter another earnings season.

22 Responses to “Over-Trading Our Option Positions: Good for Brokers, Not Good For Us”

Click here to cancel reply.
← Evaluating the Performance of our Mutual Funds and Financial Advisors
Technical Analysis Indicators for Long and Short-Term Portfolios →