Never sell a covered call or a cash-secured put if there is an upcoming earnings report. I will continue to repeat this mandate to ensure that new members will not suffer the financial fallout from a disappointing earnings report. There are times, however, when we have so much confidence in a stock which has historically beaten consensus estimates, we may want to keep the stock through the earnings report rather than sell it. This article addresses how we can achieve this goal and provide protection if the report disappoints.

What is a protective put?

This is an option that defends against a decrease in share value of a security already owned. It gives the put holder the right, but not the obligation, to sell the stock at the strike price. As it relates to earnings reports, protective puts would need to be purchased four times a year for a stock remaining in a covered call portfolio. 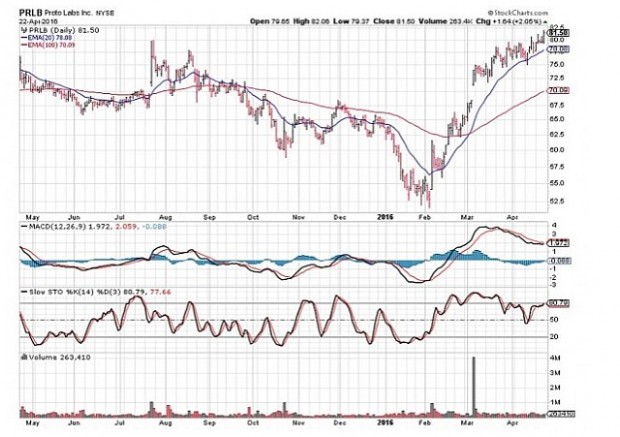 Since the beginning of February, this stock has been on a nice run-up and made our Premium Watch List. The projected earnings report date is 4/28/2016. We know that we cannot write a covered call for the May contracts at this time but would like to hold this security through the earnings report and then sell the call option. 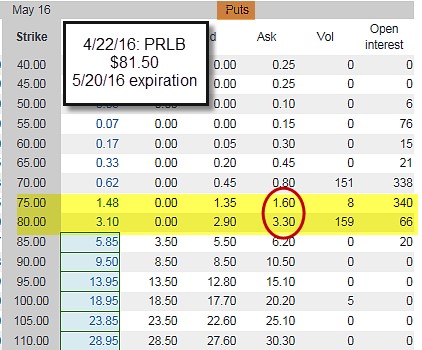 Limit orders have the benefit of not costing us any cash but the disadvantage of not having a defined specific maximum loss as do protective puts. Many investors will set limit orders at 8-10% below the current price so that would calculate to approximately $75.00 for PRLB currently priced at $81.50. If the stop loss order is hit and shares sold at $75.00, the loss is $6.50. However, if the price gaps down after a disappointing earnings reports, the loss can be more than $6.50, sometimes significantly more.

If share price declines below the strike, there is a benefit to the higher strike protective put.

What if share price stays the same or moves up in value after the report?

In these scenarios, the insurance of protective puts was not activated. Put value will decrease for three reasons:

If the underlying has Weeklys associated with them, puts need to be purchased for only the week of the report which will cost much less than the monthly put.

It is critical to avoid earnings reports when selling options because of the inherent risk from a disappointing report. Should an investor hold a stock through the report with the intent to write a call after a favorable report, consideration should be given to protective puts. The benefit is defined protection against catastrophic loss and the disadvantage is the cost of the put. In many cases, the maximum loss is less than that of setting a no-cost stop loss order.

This amazing tool, developed by Premium Member David L, allows us to evaluate current covered call positions mid-contract and offers several “what-if” scenarios. Login to the member site and scroll down the “Resources/downloads” column to “D”. There is also a user guide written by Alan to explain all 32 cells.

Global stocks dropped slightly this week. The Chicago Board Options Exchange Volatility Index (VIX) declined slightly from 11.87 to 11.36. This week’s reports and international news of importance: