Setting the 20%/10% Guidelines After Rolling out-And-Up

Exit strategies for covered call writing are critical to the ultimate success we achieve when selling covered call options or cash-secured puts. One of the prime strategies associated with covered call writing when share price declines is the 20%/10% guideline. This strategy guides us when to close our short options position if share price declines based on a percentage of the original premium received and time within the contract. As an example, if we sold an option for $2.00, the guideline tells us to close it at $0.40 in the first half of the contract and at $0.20 in the latter part of the contract. So far, this is pretty straightforward. However, what if we have rolled out and up, perhaps incurring an option debit along with a buy-up in share value? How do we then establish our base premium to then use the 20%/10% guidelines? This article is a product of one of the best questions I have ever received from our members:

I would appreciate some clarification relative to determining the sale price of a covered call position, which is needed to apply the 20%/10% guideline on an ongoing basis. In some in-the-money, roll-out-and-up situations (later date and higher strike price) where a net option debit results, some buy-up value is sometimes involved as well. Shouldn’t this buy-up value be algebraically included in determining the net sale price of the call thereby offsetting part or all of the debit value? Am I looking at this correctly?

Paul sure is, let’s explore.

Rolling out-and-up to the $35.00 strike: “What Now” tab of Ellman Calculator

Click here for a free copy of the Basic Ellman Calculator

***Thanks to Paul S for this outstanding question which allowed me to provide color to our members on an exit strategy that is an integral part of our position management arsenal.

Not only have you, our members, put BCI on the financial map but you expanded those borders to Europe and beyond. Have a look at an article I wrote for a prestigious German financial publication: 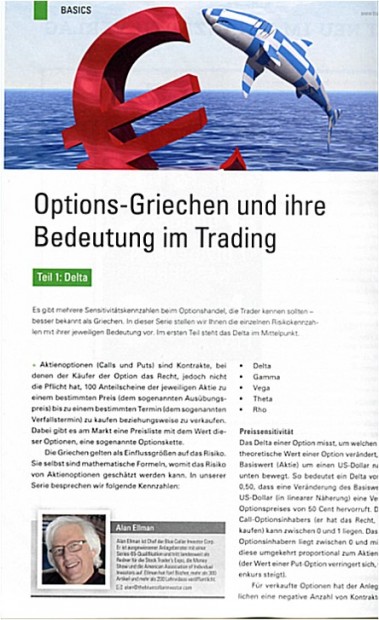 Your support has never been more appreciated.

On behalf of retail investors

Isn’t it time for companies like Amazon and Google to split their shares like Apple did in June, 2014 to make them more affordable for retail investors? After all, Blue Collar Investors do play a major role in the success of these corporations.

Global stocks were little changed amid conflicting central bank outlooks from the US Federal Reserve and the Bank of Japan. Oil prices continued their downward slide. The Chicago Board Options Exchange Volatility Index (VIX) dipped slightly this week to 11.87. This week’s reports and international news of importance: