The New York Stock Exchange, the Nasdaq Exchange, uhhhhhhhhh. There are more?

Okay can’t answer that one, how about this question Mr. know-it-all stock investor: The heart and soul of Wall Street is located where?

Well you’re right about that but perhaps not for very long. In the next few years the correct answer to the second question may be Secaucus, New Jersey or Kansas City, Missouri. Oh, and those other two exchanges….Direct Edge and BATS.

All this has to do with the age of computers and high frequency trading. When we enter our covered call trades and then look to order status what do we see? EXECUTED! How did they do that so fast? People didn’t, computers did. There is a worldwide demand for speed in trading and lower commissions. As a result machines are taking over. Direct Edge is America’s newest stock exchange. It consists of a series of interconnected high speed computers in a warehouse in Northern New Jersey. The amazing stat is that it processes up to 10,000 orders per second and has only 90 employees. Another such exchange is called BATS which is located in Kansas City, MO. It has captured 10% of US market share in just four years. There are some powerhouse players behind these new exchanges. Direct Edge is backed by Goldman Sachs, Citadel Securities, Knight Capital and the International Securities Exchange. It also accounts for about 10% of stock market trading in the US. To combat these growing technological giants, the NYSE has countered with Arca, a new electronic data center also located in New Jersey.

Well is this good or bad for us? Certainly speed of execution and lower trading costs are great but there are concerns. High speed trading had led to a new form of trading where algorithms are developed to enter trade orders. These are computerized programs that based on certain criteria make all the buy/sell decisions for the trader. Elaborate decisions to initiate orders based on information received electronically is processed before a human could even bat an eyelash. Believe it or not, some of these programs have the ability to scan certain social networking players like Twitter and react to information gleaned there. To some extent trading has become gaming.

Recently on this site, there was a discussion as to the benefits of using technical analysis in our buy/sell decisions. As most of our members know, I am a huge proponent of using technical analysis as ONE aspect of this decision-making process. This concept was confirmed when I toured the floor of the New York Stock Exchange with my son Craig a few months ago. I was told by a market maker that technical analysis has become a large part of the algorithms used by many of the higher level players. We read our charts, the computers read theirs. In my view, there will never be a level playing field between the institutional investors and Blue Collar Investors. However, that incline is decreasing and the odds are getting better and better for us. We are more educated than ever and paying less to participate in the “game”. I’m okay with that. At the same time, we need to be aware of the changing environment and that is why I decided to write this article.

Many of you are probably thinking about the computers and the flash crash of May 6, 2010. The S.E.C IS blaming this on the computers and the new technology of high speed trading. It seems that a single $4.1 billion block of E-Mini S&P 500 futures contracts was sold through a computer algorithm. Billions of dollars of sell orders flooded the market over a 20 minute span. The markets were already nervous because of the debt crisis in Europe. THE COMPUTERS SHUT DOWN! There were no buyers and the DOW dropped 700 points in minutes. There was then a quick recovery and ultimately more than 20,000 trades were ruled invalid. Since then the SEC has installed some circuit breakers where trading will be halted if a stock drops by 10% within a five-minute span. The SEC is also taking further steps to monitor this new age of stock trading. It is truly becoming a new stock market.

As we speak there are more projects under construction like the 428,000-square foot data center in Chicago opened by the Chicago Mercantile Exchange. I have oftentimes used the analogy of David and Goliath. We continue to be David and they are now a high-tech version of Goliath. We still have our arsenal of slingshots using fundamental and technical analysis along with common sense to garner a significant share of the pie. There is enough for everyone even in the “new stock market”! 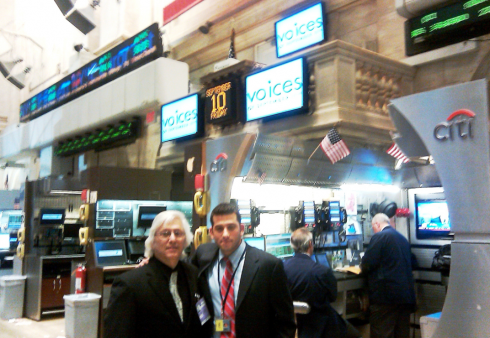 Alan and Craig on the floor of the Stock Exchange

With January contracts expiring this Friday the 21st many of us are preparing for possible rolling strategies this coming week. Since we are in the heart of earnings season I want to stress the importance of checking earnings report dates before entering into this exit strategy. Premium members will find these dates on the running list (green highlighted area: these are “expected dates” and could change slightly) and are separated by broken black lines (from one end of double red arrow to the other)according to contract month: 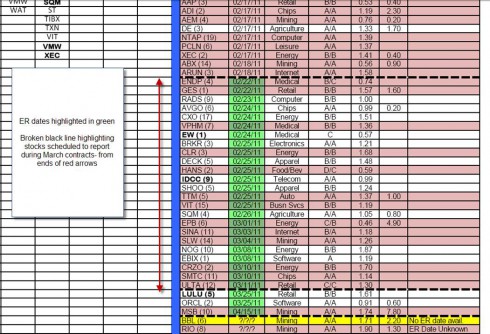 If you are not a premium member an excellent free site to access earnings dates is:

I have also highlighted the rolling strategies video I previously produced on the homepage:

I will continue to show this video on this site the week before each contract expiration.

I am pleased to report a positive tone to the overall economic reports this past week:

Many thanks to one and all for your continued support especially our members who contribute to our blog. This is an extremely valuable tool as we learn from each other in our common mission of becoming CEOs of our own money. Whether you are a frequent contributor or someone who lurks in the shadows we value and appreciate your participation in the BCI community.

***The market is closed on Monday, in observance of the Martin Luther King Jr. holiday.

Posted on January 15, 2011 by Alan Ellman in Investment Basics