The New York Stock Exchange: Part of a Global Conglomerate and a Stock to Watch

If we were to ask the average investor this question: What does the ticker NYX stand for? The most likely answer would be: The New York Stock Exchange. We would respond: Good answer, but you only get partial credit! The reason for this is that in this global economy businesses must offer multiple product and service lines. In order to flourish, the New York Stock Exchange can no longer stand alone.

Let me give you an analogy. When I purchased my first home and I needed a new faucet for my sink, I would drive a few miles north to the local plumbing supply store. When I needed a new ceiling fixture for my bedroom, I would travel a few miles south to the local lighting supply shop. Winter is upon us and I needed a snowblower, so I commuted a few miles west to the garden supply store. When I got ambitious and decided to build a shed in my backyard, I drove a few miles east to the lumber yard. Today when I need a faucet, lighting fixture, snowblower, and lumber I go to Home Depot around the corner. Mom and Pop businesses are a thing of the past and one stop shopping is the name of the game.

So what is the correct answer to the question? What does NYX stand for? The answer is: NYSE Euronext, Inc. This entity brings together major marketplaces across Europe and the United States whose histories stretch back more than four centuries. It is by far the largest combination of its kind and the first to create a truly global marketplace group. NYSE Euronext is headquartered in New York City with European operations run out of Paris.

Let’s break down the components of NYX:

1- The New York Stock Exchange (NYSE)- the premier lisiting venue for the world’s leading large- and medium- sized companies. They meet and adhere to the overall highest listing standards. It is the largest and most liquid equities exchange in the world.

2- NYSE Arca– a fully electronic exchange for growth-oriented enterprises. Listed companies can grow on NYSE Arca and transfer easily to the NYSE once they meet the rigid requirements. This all-electronic entity is also a leading listing and trading platform for exchange-traded funds (ETFs like the Qs), offering the largest public ETF liquidity pool in the U.S.

3– NYSE Euronext– the primary market in the Eurozone for large- and medium-sized companies. It is the first integrated cross-border exchange, combining in a single market the stock exchanges of Portugal, the Netherlands, France, and Belgium.

In this new frontier wherein the global components are playing larger and larger roles, entities such as the New York Stock Exchange are looking towards mergers and acquisitions to keep pace. Those that don’t will end up like the mom and pop businesses of yesteryear. Despite these apparently wise business maneuvers, NYX has not been treated well by the investment community. Now it’s true that all financial related equities have been hammered but it seems to me that this equity has been hit harder than average. If you view the charts below, you will see a steeper and higher percentage decline in the share price of NYX than the investment/broker industry in general: 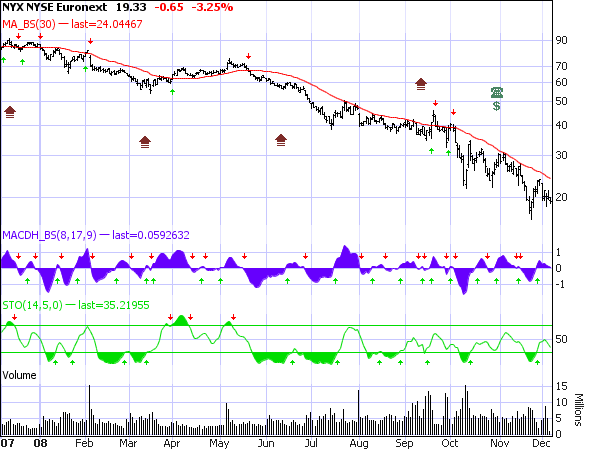 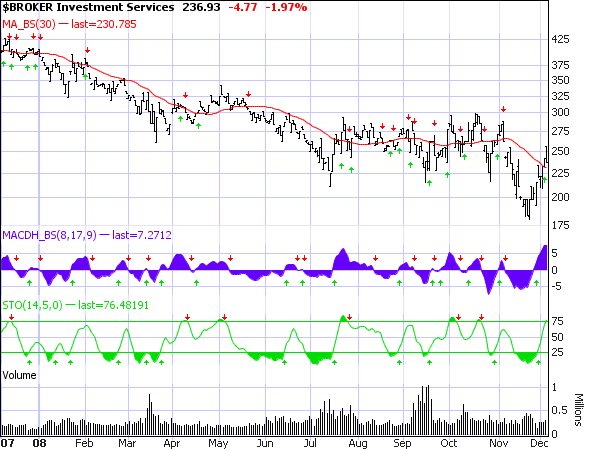 Now, as a Blue Collar Investor, we would NOT be owning this equity because it does not meet our system criteria. Those who buy and hold would be seeking out the Kleenex to control the unrelenting stream of tears cascading down their faces. Could this, however, represent a potential opportunity for us? I think so. Certainly worthy of following this equity at least over the short run. Here we have a company that is keeping up with the changing times, has had a series a positive earnings reports, and to a great extent has been a victim of its environment. Is it conceivable that when the economic turmoil subsides and the financial community begins to strengthen, that this stock will catch up and surpass the others? Let’s watch this one together.

Market Tone:There is some reason for optimism as the short term (10-d) Volatility Index has improved from 77 to 60: 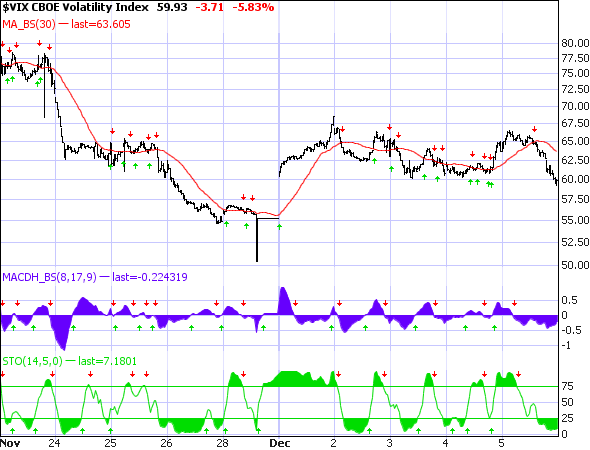 The longer term VIX (3-month) still shows an uptrend but a flattening moving average perhaps reflecting a calming trend in the markets. 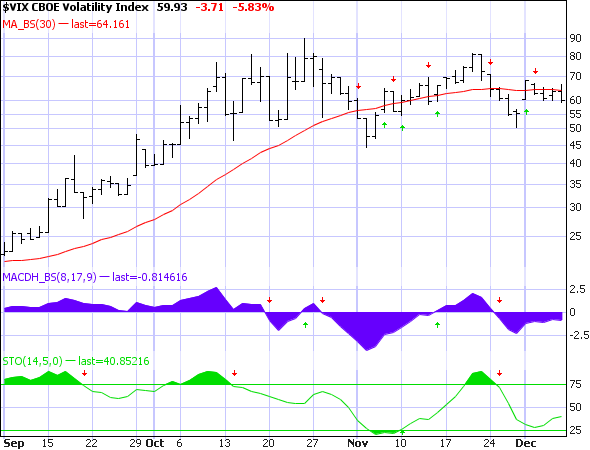 Much too early to celebrate but I’m glad to see some positive signs. The markets are still incredibly news driven as psychology is playing a much greater role than it usually does.

When a baseball player gets hot, the fans think he is the second coming of Babe Ruth. When that same player strikes out 4 times in one game they want to run him out of towm. The point is that he is never as good as he appears when he is at his best; nor as bad as he presents when at his worst. He is somewhere in between. The same holds true of our stock market (real estate too). I hear investors exclaiming: “I’ll never put another penny in the market”. These are many of the same people who put every dime they had into the equity market back in the days of the dot-com explosion. I understand that many of your 401k’s have become 201k’s but we ultimately must have faith in our country and its economy. Let’s not put that ballplayer on a pedastal he doesn’t deserve. But let’s not throw him off the team either!

The economy lost more than a half-a-million jobs in November causing the unemployment rate to rise to its highest level in 15 years. This confirms the announcement that a committee of economists made that our econmomy has been in a recession since December of 2007. This means that the economic decline had already lasted longer than the average recession. For the week, the S&P 500 fell 2.2% to 876 for a year-to-date return of -39.1%.

Posted on December 7, 2008 by Alan Ellman in Investment Basics

5 Responses to “The New York Stock Exchange: Part of a Global Conglomerate and a Stock to Watch”

← RECESSION- A NORMAL Part of the Business Cycle
The Bernie Madoff Ponzi Scheme: A Validation of our Blue Collar Philosophy plus Tony C. checks in on Cramer →