The Relationship Between Delta and the Time Value of our Options

Covered call writers and put-sellers are always looking for an edge. Some may wonder which option Delta would make the best option-selling candidate. Intuitively or from experience we know that at-the-money strikes (Deltas near 0.50) generate the highest initial returns. I’ve stated that over-and-over again in my books and DVDs. Can this be demonstrated mathematically (look out folks, I’m at it again!)? Today’s article will be an exercise, not a scientific study, to demonstrate the relationship between Delta and our time value initial profit generated when selling options. Our goal is to calculate the time value per unit of Delta for in-the-money, at-the-money and out-of-the-money strikes. 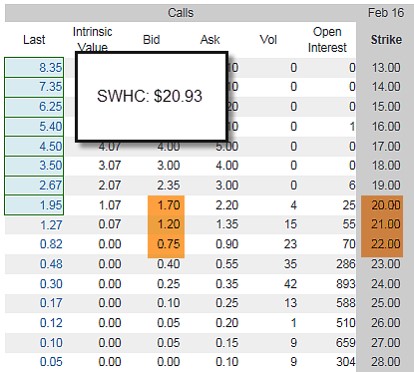 Calculating Delta for the $20.00 in-the-money call

Calculating Delta for the $20.00 Call

Calculating Delta for the $21.00 near-the-money call

Calculating Delta for the $21.00 Call

Calculating Delta for the $22.00 out-of-the-money call

Calculating Delta for the $22.00 Call

The $21.00 near-the-money strike generated the highest time value per unit of Delta while the in-the-money and out-of-the-money strikes were both lower. Deltas near 0.50 will generate the highest time values and that figure will decline as Delta moves to 0 or to 1.0. Although this exercise is not in the galaxy of a scientific experiment, I would expect, based on our knowledge of Delta and option premiums that this could be duplicated over-and-over again.

Lower Delta options should be favored in bear (in-the-money calls) and bull (out-of-the-money calls) markets based on the moneyness of the options. In these two scenarios we can take advantage of upside potential and downside protection afforded by these strikes. If we were convinced that the market is consolidating and trading sideways, high-Delta options may be more appropriate.

Registration for the July 28th Blue Hour webinar is now open to Premium Members only. This event is free to members. Once you are registered, you will receive instructions regarding how to attend this event and will be given an opportunity to submit a question.

The BCI team and I are looking forward to providing this new educational tool to our members and happy to make this a free resource for our loyal members. On September 1st, there will be a rate increase for new members but you will be grandfathered into the current lower rates as long as membership remains uninterrupted.

Thank you for your loyal support over the years.

Global were generally flat this week with continued Brexit fallout and concerns over the state of the Italian banking sector. Oil prices fell and The Chicago Board Options Exchange Volatility Index (VIX) declined to 13.23 from 15.16 last week. This week’s reports and international news of importance:

BCI: Moderately bullish. Currently hold no short option positions due to the Brexit situation but fully invested in stocks and ETFs. Pending market action this coming week, my plan is to favor out-of-the-money strikes for the August contracts.