What is the Best Time to Execute Our Trades?

Covered call writing and selling cash-secured puts involve buying and selling stocks and options. We work meticulously to do everything possible to throw the odds in our favor to result in successful trades. Achieving the highest level of returns in a low risk manner is one of our mission statements. I have frequently highlighted the three required skills to become an elite option seller:

All three of these talents involve trade executions and the timing of these trades are another way of elevating our degree of success. In this article, we will explore the best time to execute our trades for each of these required skills.

I initiate my trades during the first week of a Monthly contract usually on Monday or Tuesday after expiration Friday. The reason relates to the time value erosion that Theta has on our option premiums as shown in the chart below:

For near-the-money strikes, time value erosion is logarithmic in nature (starts off slowly and then “falls off a cliff”), not linear. If we wait too long, we will lose out on a significant amount of time value premium.

Now, let’s get even more specific. I will enter my initial trades between 11 AM ET and 3 PM ET. The reason for this is to avoid early morning and late afternoon market volatility caused by computerized institutional trading (mutual funds, hedge funds, banks and insurance companies). By limiting our initial trades to these four hours we will avoid most of that volatility and uncertainty.

This is the easiest mid-contract exit strategy to achieve because we can automate it. After initiating the short call sale, set a limit order to buy back the option (BTC) at 20% of the original options sale price in the first half on the contract and change to 10% in the latter part of the contract. For example, if we sold the original option for $2.00, immediately set a BTC (buy-to-close) limit order (GTC-good-til-cancelled) at $0.40 and change to $0.20 mid-contract. A closing trade will be executed based on the price threshold.

This one requires a bit more effort. We close mid-contract when time value component of the option approaches zero which will occur when share price appreciates significantly. When the original trade is opened we can check the option chain to see which strikes are trading near parity (all intrinsic value and time value near zero). Here is an option chain for Facebook from 9/30/2016: 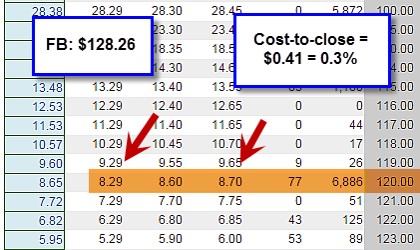 With FB trading at $128.26, we see the $120.00 strike trading near parity ($0.41 of time value). To close mid-contract the cost-to-close is o.3%. This alerts us to follow the option value whenever our strike is $8.00 or more in-the-money. As a general rule, it makes sense to check the time value component of our sold option whenever share value moves up significantly.

Since Theta will have a more deleterious impact on the near month strike than it will on the far month strike, it is to our advantage to execute this exit strategy as close to 4 PM ET on expiration Friday as possible. I wouldn’t wait until the very last minute (say 3:45 PM ET) as there may be a glitch in the online broker platform. I usually begin rolling my options about 2:30 PM ET on expiration Friday. If I’m travelling, I may initiate these trades on Thursday. The benefit of waiting until Friday afternoon is small but it does exist.

The success of a trade is never guaranteed but we can sure throw the odds dramatically in our favor. One way of improving our results is to be cognizant of the most beneficial times to execute our trades.  These times will vary depending on the type of trade being initiated.

For more information on executing our initial and position management trades, see both versions of the Complete Encyclopedia for Covered Call Writing and the companion DVD Programs.

Global stocks moved up this week after the US Federal Reserve stated that it will raise rates gradually and the populist Freedom Party fared worse than expected in Dutch elections. West Crude oil prices were little changed, holding below $50 per barrel on continued high inventories. Volatility, as measured by the Chicago Board Options Exchange Volatility Index (VIX), stayed about the same, at $11.28. This week’s reports and international news of importance:

BCI: I am currently fully invested and have an equal number of in-the-money and out-of-the-money strikes. A 25-basis point March interest rate hike was exactly what the market was expecting.

41 Responses to “What is the Best Time to Execute Our Trades?”

← Put-Selling in Margin Accounts
When Do We Keep a Stock that has Declined in Value? →