Covered call writers and put-sellers know that option value is impacted by the change in stock price by the amount of its Delta. Delta, one of the option Greeks, is defined as the amount an option value will change for every $1.00 change in share value. If a call option priced at $2.00 with a Delta of .50 sees its underlying security rise in value by $1.00, the theoretical value of the option will rise to $2.50, all other factors remaining the same. However, there are times when stock price moves up and option value moves down (and vice-versa) and to explain this we need to explore other factors that influence option pricing.

Let’s look at the other four Greeks and see which is the most likely to result in this unusual inverse relationship between share price and option value for calls:

Gamma is a second generation Delta. It’s always positive and will only result in option value increase as stock price rises…can’t blame Gamma.

Time value erosion is logarithmic in nature (not linear) especially for near-the-money strikes and can certainly negatively impact option value over time. However, what if option value goes down the same day share value rises. When this occurs, we can’t blame Theta.

Interest rates have very little impact on option value especially in low-interest rate environments. When rates are changed, it is usually by 25 basis points and so Rho is considered a secondary Greek, with little influence on our 1-month option-selling decisions. Definitely, can’t blame Rho

One obvious time of decreasing implied volatility would be before (higher volatility) and after (lower volatility) an earnings report. Nike (NKE) reported earnings after hours on 12/22/2015. Here is the chart for the $130.00 in-the-money call option just prior to market close that day: 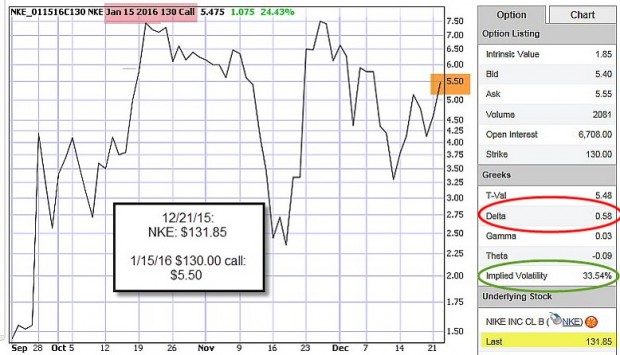 The earnings announcement was initially received positively and here is the screenshot of that same option the next day: 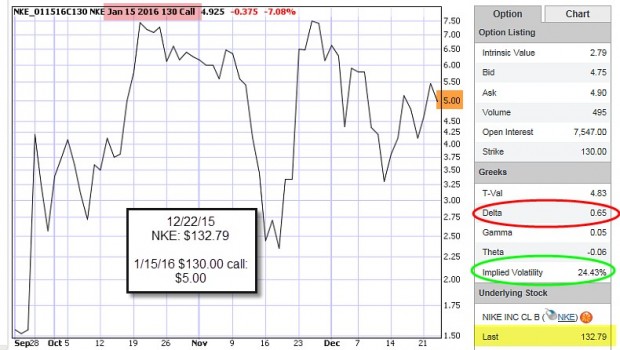 Here we see stock price moved up approximately $1.00 to $132.79 (yellow field) but option value declined to $5.00 (brown field). Factoring in Delta alone, we would expect option value to rise by the previous delta of .58 resulting in a new option value of $6.08 ($5.50 + .58). However, note that the implied volatility (green oval) has declined substantially to 24.43% after the report was made public. Although the Delta component was pushing option value higher, the Vega component not only neutralized Delta but actually caused the option value to deteriorate. As an aside, note that Delta moved up to .65 as the $130.00 strike moved deeper in-the-money.

The Greeks are a mathematical means of calculating the risk inherent in our option positions. Each of the five Greeks are defined based on all others factors remaining constant. In the real world, all other factors are dynamic and so to understand option pricing we must integrate all the Greek factors into the equation. Our goal, as Blue collar Investors, is to become educated to the highest possible levels so our returns can also achieve those heights.

This shortened week’s news had a mixed tone to it. This week’s reports:

BCI: Cautiously bullish but remaining in a defensive posture selling at least 50% in-the-money strikes and deeper out-of-the-money puts until there is clarity regarding the market reaction to the Fed rate hike.

The BCI team wishes you a happy and healthy holiday season and a lucrative 2016,