Am I Losing Money When Option Value Increases After Entering A Covered Call Position?

The risk in covered call writing is in the stock purchased not in the option sold. Sound familiar? It’s in all my books and DVD Programs and mentioned in my seminars and webinars. Yet it appears when we look at our brokerage statements that this concept is not true. That is because we see a minus sign after having sold the option and the number adjacent to that minus sign gets larger and larger if the value of the option increases. That leads some investors to believe that if option value increases, there are terrible losses about to be realized…not true.

To explain, let’s have a look at Halliburton Company (NYSE: HAL) where the following covered call position was established:

Next, let’s have a look at the price action of this option as share price rises: 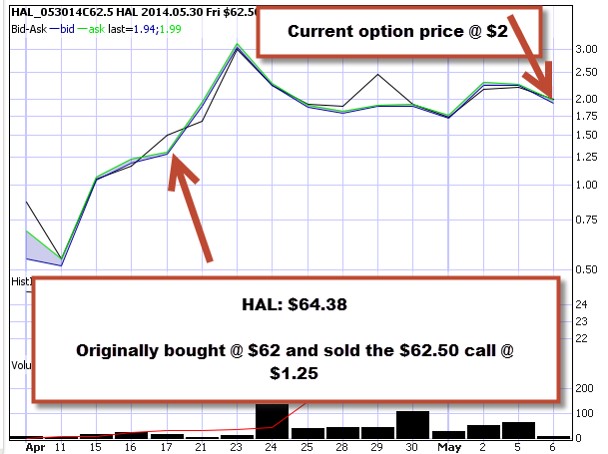 Before we answer that question, let’s view the price chart for HAL which is fueling the rise in option value: 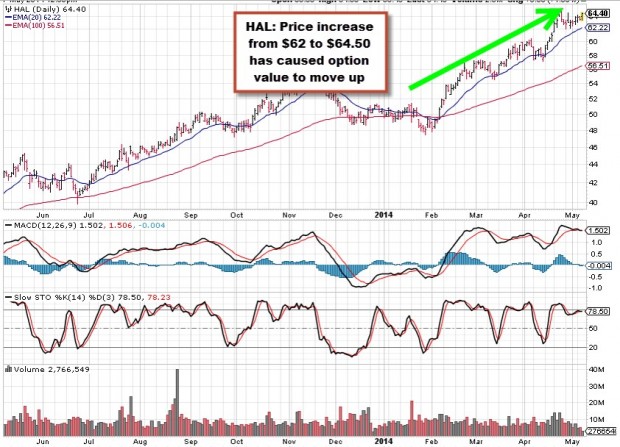 We have learned from studying the Greeks that an option value will change by its delta for every $1 increase or decrease in share value. We also know that as a strike moves deeper in-the-money (as this option is doing) the delta moves higher or closer to “1” In this case, the option is nearly $2 in-the-money, so the intrinsic value alone is close to $2. In this case, theta (time value erosion) is having a lesser impact on option value than is delta.

Are we now losing money on the option side?

NO we are not. The minus sign or (Brackets) displayed in our broker statements are there for accounting reasons and mean that we have an “open” position which in order to close would leave us in a net debit position (a loss). However, the choice to close the position is totally ours to make and will not be executed unless it is in our best interest. For example, we may close the short position if rolling the option on or near expiration Friday will result in a net credit that meets our goal. Another example where we may close our short position at a higher price than entered is when we execute the mid-contract unwind exit strategy (pages 264 – 271 of the Complete Encyclopedia…). These two scenarios are favorable trades that generate additional cash flow in our portfolios.

Finally, we can take no action at all. If the price of the stock is above the strike and it doesn’t make financial sense to close the short position, we allow assignment which means that we have maxed our trade. We received the initial option premium plus any share appreciation from purchase price to the strike and our shares are sold for the price we agreed to sell them for when the trade was initiated. The cash is then used to establish a new covered call position the following week. Once the position is closed, the negative (brackets) signs will disappear in our broker statements and our option gains will be realized.

Rising option value is a positive for us despite the negative appearance on our brokerage statements. Our main concern is when share value declines and in that case so will option value.

July 10, 2014: Private seminar for a group of college interns

Link to register will be uploaded to this site once received from The Money Show.

The market continues to be resilient despite the negativity of some of the talking heads:

23 Responses to “Am I Losing Money When Option Value Increases After Entering A Covered Call Position?”