Covered call writers and put-sellers must set goals regarding targeted premium returns before entering trades. These objectives are based on personal risk tolerance, market assessment and chart technicals. One of the most flagrant mistakes made by option sellers is to make trade decisions based on the highest premium returns. Covered call writing and put-selling are conservative option strategies geared to conservative investors who have capital preservation as a key strategy goal. This article will highlight a trade initiated by a member of an investment club who asked me to analyze the trade.

An in-the-money strike was selected indicating a defensive posture in the trade where the intrinsic value component will protect the time value component. This will generate additional downside protection but not allow for additional share appreciation potential profit. 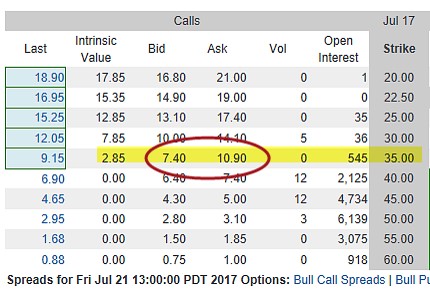 PTLA Calculations with The Ellman Calculator

An initial time value return of 14.6% with a downside protection (of that initial profit) of 10.3% is huge and seems too good to be true on the surface. In fact, it is too good to be true. Whenever there is enormous premium returns we know that it is because the underlying security is extremely volatile. High implied volatility translates into high risk as share value can decline below the breakeven, $29.90 in this scenario. 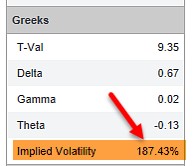 The implied volatility calculated for this $35.00 in-the-money call option is a staggering 187.43%, more than 20 times that of the S&P 500 on 6/23/2017. This is the reason for the great returns but hidden in the weeds lies the immense risk preparing to rear its ugly head.

The amount of profit we stand to generate from investment vehicles is directly related to the degree of risk we are willing to assume. We should never be enticed by high premium returns until we have analyzed the amount of risk we are about to incur and make an assessment if it meets our personal risk tolerance profile.

Global dipped slightly lower this week along with an increase in volatility. The price of a barrel of West Texas Intermediate crude oil fell about $1 to $56.10. Volatility, as measured by the Chicago Board Options Exchange Volatility Index (VIX), rose to 11.43 from 11.10 a week ago. This week’s economic and international news of importance:

BCI: My portfolio makeup reflects a neutral bias, selling an equal number of out-of-the-money and in-the-money calls. Waiting to see how the vote on the new tax plan plays out before taking a more bullish stance. Outside of this concern the global economy is performing well.

Click here to cancel reply.
← Mitigating Losses After a Disappointing Earnings Pre-Announcement
Russell Rebalancing Day: A Cause for Concern? →