Calculations When an Unexpected Earnings Report is about to be Released

Never write a covered call or sell a cash-secured put if there is an earnings announcement due prior to contract expiration. This is such an important rule in the BCI methodology. However, we all know that life is not perfect and sometimes we are thrown the proverbial “curve ball” Earnings reports come out every quarter or every three months. If a report is released on June 1st, we would expect the next one to be made public on or around September 1st. There are times when the upcoming report is announced to come out much sooner than anticipated. Frequently, it is related to the previous report announcement coming out much later than expected and the upcoming announcement will get the reporting back on a 3-month tract. That said, what do we do if we already entered a position and then realize that a report is due out prior to expiration because of an earlier-then-expected release date? In November 2016, this happened to one of our members, Mike, with stock Thor Industries (THO), a stock on our Premium Stock report.

Why do we avoid earnings reports?

Because of the unknown nature of the report and how the “market” will react to it, there is an extreme amount of implied volatility in the stock which can move it significantly up or down in price after the announcement. By selling a covered call, we are capping the upside (resulting from a positive surprise) and leaving the downside unprotected (outside of the option premium). This is taking a conservative options strategy and transforming it into a risky one. This may be okay for some but an event to avoid for most. There are times we really like a stock and perhaps it has also had a history of positive surprises. In these scenarios, it is better to hold the stock through the report to take advantage of share appreciation following a positive report and then sell the option…our goal is to benefit from both a positive report and from option premium. In most cases, we simply will not own the stock until the report passes.

Technical chart prior to the report 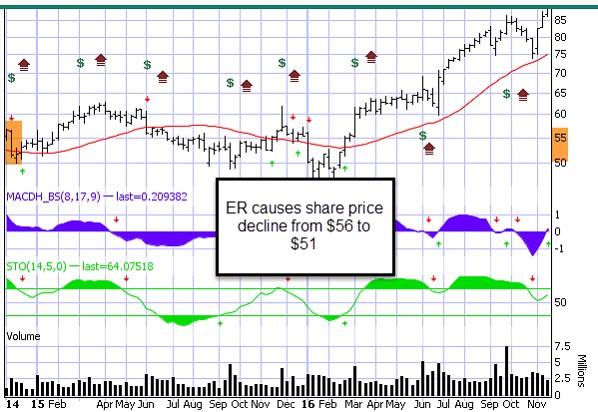 THO Chart Prior to Earnings Release

In February 2015, a negative surprise resulted in a share price decline of $5.00 (see brown fields). This chart explains the inherent risk related to earnings releases and also portrays a bullish overall chart and one of the reasons the stock earned its way onto our Premium Stock Report.

Calculations if the position is closed prior to the report

We can actually generate an impressive 1-week return and avoid the risk of a negative surprise. We can also just close the short calls and retain the 200 shares with a goal to benefit from a positive surprise. Here we are still incurring the earnings release risk but not capping the upside.

A positive earnings surprise resulted in an increase in share value of $10.00 the next trading day after the report was made public. Those who held the stock benefitted the entire amount because the call was removed and the upside was not capped. Those who closed the entire position and did not own the shares, did not profit from the share advance but did remove the risk of a potential negative surprise…we look forward not back.

Earnings reports should be avoided. In cases when reports are scheduled to be made public in an unexpected shorter time frame, it will be to our advantage to either close the entire position or at least the short call leg of the trade. Which approach we take will be determined by our personal risk tolerance and the confidence we have in a positive surprise based on historical data.

Global moved up after centrist Emmanuel Macron advanced to final round of the French presidential elections, edging out populist Marine Le Pen for the top spot. Macron holds a 20-point lead in the polls ahead of 7 May’s vote. Oil prices fell to $49.00 from $50 a barrel last week as fresh Libyan crude supplies hit the market. Volatility, as measured by the Chicago Board Options Exchange Volatility Index (VIX), dropped to 10.82 from 14.7 a week ago. This week’s reports and international news of importance:

BCI: I am currently selling an equal number of in-the-money and out-of-the-money strikes, a neutral posture… too much geopolitical and domestic uncertainty for me to join the bullish party at this time

Click here to cancel reply.
← Covered Calls and Dividends: A Proposed Strategy
Should We Favor Put-Selling Over Covered Call Writing? →