Covered call writers and put-sellers know that options should never be sold when there is an upcoming earnings report prior to contract expiration. This is one of the most important rules in the BCI methodology. The reason is the result of the inherent risk we are subject to from a disappointing report. Since we know the projected dates of these quarterly reports, avoiding them can easily be accomplished. However, from time to time, a company will pre-announce information regarding an upcoming report and this unexpected news can impact our stock and option positions. In this article, an overview of pre-announcements will be presented along with the practical impact they have on retail investors.

What is an earnings pre-announcement?

It is a statement about earnings that are materially different from the expectation of financial analysts or from prior guidance given by the company.

Why will a company pre-announce?

The Securities and Exchange Commission (SEC) exists to protect investors and therefore requires companies to provide meaningful and timely information to the public.

Shareholders can sue a company for having known certain information and not disclosed it. One such scenario could be a company being aware of an earning’s “miss” well before the report date.

When a company takes an initial price hit prior to earnings season, it may not look as bad when it reports along with its industry competitors weeks later.

Concern for its investors

By being candid and providing timely information regarding a mid-course correction, investors can take action sooner rather than later and this can reflect positively on a company that is then likely to get punished to a much lesser extent, if at all.

When should a company pre-announce?

There is no legal requirement here but an unwritten rule is that when a company knows that it will miss by 5% or more, it should pre-announce within a few weeks to a few days of the end of a quarter.

Image risks of not pre-announcing

The qualifications of management come into question as does the accuracy of the board’s forecasts. The trust factor also can be impacted and ultimately share value will be punished to a greater extent than had the company pre-announced. Companies have learned that a poor quarter should not be exacerbated by ignoring the obligation to pre-announce.

How to manage pre-announcements: Practical application

All this great information presented thus far and now I’ve got nothing! Well, I’ve got a little but it’s not impressive. That’s because we never know when a pre-announcement will be made public. Most of the time there will be no pre-announcement but it is not incredibly rare. It will pop up from time-to-time. Some ideas:

1- If we used only stocks that reported earnings in the previous contract month and a long way from the next quarterly report, pre-announcements will be virtually a non-issue. The problem with this approach is how limiting our database of eligible candidates will be. Our rigorous screening process already has a limiting effect.

2- Use exchange-traded funds (ETFs) instead of individual stocks. There are pros and cons to ETFs but earnings and possible pre-announcements will become a non-issue.

3- Ignore the possibility of pre-announcements and deal with bad news if and when it comes. We do so by mastering the third required skill of option-selling…position management. This is the world I reside in as it relates to pre-announcements but feel free to reside in worlds one or two if they more closely align with your trading style.

Location of actual ER dates in our premium stock reports 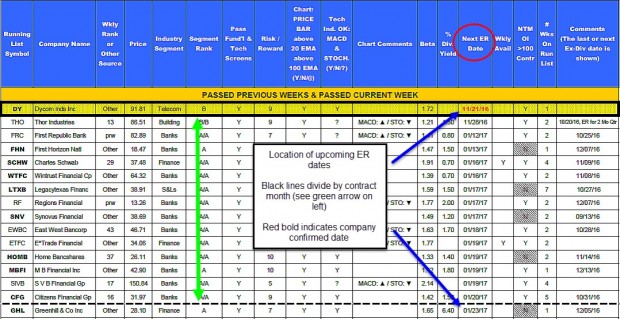 Earnings pre-announcements can be the source of unexpected bad news. Unlike the actual earnings report dates, we do not know about these events in advance. We should have a plan in place to deal with these events if and when they occur. For detailed information on position management strategies in my last two covered call writing books:

Premium members login and scroll down on the left side to the Blue Hour registration link. General members can purchase a seat at the Blue Collar store (https://www.thebluecollarinvestor.com/store/) and use promo code “Holiday10” for a 10% discount.

Global stocks rose this week on tax reduction expectations in the aftermath of the US presidential election. Strong US economic data suggest the economy is gaining strength even before any additional fiscal stimulus. Volatility, as measured by the Chicago Board Options Exchange Volatility Index (VIX), fell to 12.34 this week from 13.2 a week ago. Oil prices rose in anticipation of a deal to cut production at next week’s OPEC meeting in Vienna. This week’s reports and international news of importance:

The 6-month charts point to a bullish outlook. In the past six months the S&P 500 was up 6% while the VIX declined by10%.