A critical BCI rule for covered call writing is never to sell an option if there is an upcoming earnings report prior to contract expiration. Earnings reports are risky events we want to avoid. From time-to-time a company will pre-announce earnings especially if there will be a negative story to tell its shareholders when the report is due out. Unlike the report itself, we cannot know the date of this disclosure and may experience significant share decline depending on the market reaction. In February, 2017, Ritchie sent me an email of a paper-trade he executed that reflected such a scenario.

Here is a chart showing the price movement of HQY from start to finish of the February, 2017 contract: 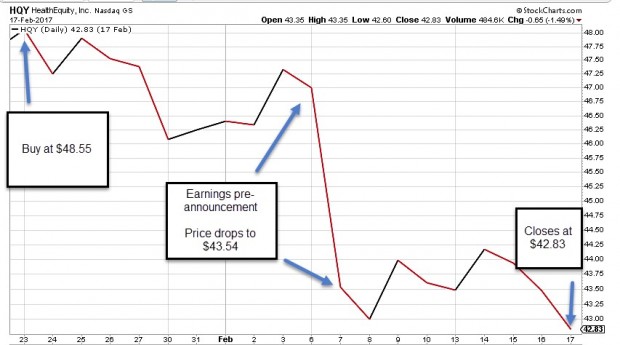 Once the unexpected gap-down occurs, we can check various sites like finviz.com to research the reason for the price decline.

HQY Calculations with The Ellman Calculator

Ritchie took a bullish position with this trade generating an initial 1-month time value return of 3% with an opportunity of an additional 3% of upside potential. There was a possibility of a 6% 1-month return.

Using the 20/10% guidelines we buy back the option and look to either roll down or sell the stock. Let’s look at a roll down to the $43.00 strike:

Shares were purchased at $48.55 and price declined to $42.83 at contract expiration. This represents an unrealized loss of $572.00 per contract…ouch!

Shares were sold at $40.00 representing s loss of $855.00 per contract…double ouch!! HOWEVER, we have options credits so let’s calculate:

Risky events like earnings reports can easily be avoided because we generally know the dates they will be made public. Other events like pre-announcements will come as a surprise and may negatively impact our trades. Being prepared with appropriate position management techniques will frequently mitigate losses and sometimes turn them into gains.

Premium members can now access the latest Blue Hour webinar located on the left side of the member site: 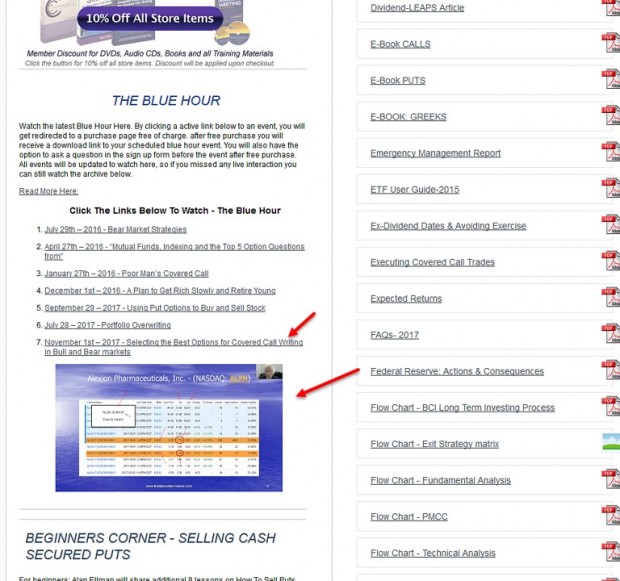 2. Three new calculators for each of the strategies in our new book

4. DVD Programs will soon be available in streaming format with downloadable workbooks

Global stocks moved to all-time highs midweek before backing off slightly ahead of the weekend. Oil gained ground amid uncertainty surrounding Saudi Arabia and Venezuela, climbing to $57.20 per barrel from $54.60 last week. Volatility, as measured by the Chicago Board Options Exchange Volatility Index (VIX), rose to 11.21 from 9.5 last week. This week’s economic and international news of importance:

41 Responses to “Mitigating Losses After a Disappointing Earnings Pre-Announcement”