Covered call writing and put-selling candidates must pass a series of fundamental, technical and common-sense screens in order to be considered eligible for our portfolios. In early January 2017, one of our members, Jim W, asked about using Ford Motor Corp. (F), a stock that does not pass our BCI screens but has several positive features: 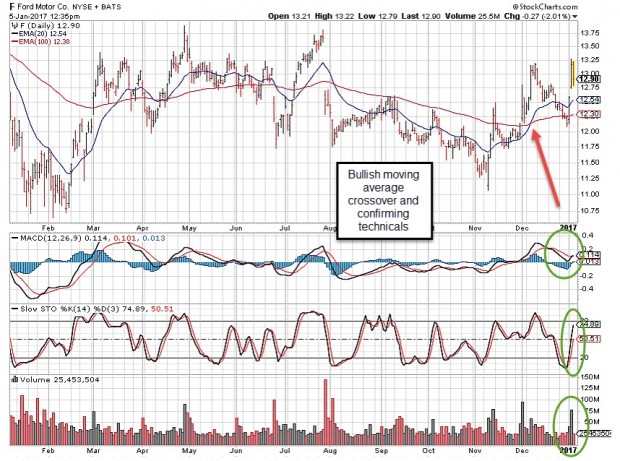 A 1-year chart clearly demonstrates an encouraging price pattern. There was a bullish moving average crossover (red arrow) in December and bullish signals coming from the MACD histogram, stochastic oscillator with volume confirmation (green circles). Now, of note are the major whipsaws present in this chart indicating a stock that may offer high premium due to the inherent implied volatility (IV) displayed in this chart pattern. To confirm, we simply can look at our option premiums but as an additional exercise I went to a free site: www.ivolatility.com to check the IV of F compared to the overall market: 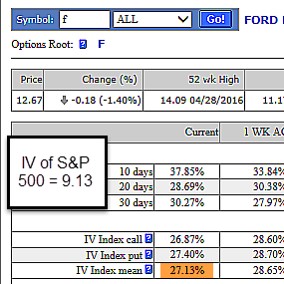 Sure enough, we see the IV of Ford is triple (27.13%) that of the S&P 500 (9.13%) and therefore we would expect significant returns for near-the-money strikes despite being a blue-chip company. Let’s see if we can generate at least a 2% initial return using this underlying. Turning to the 1-month options chain, our expectations are confirmed: 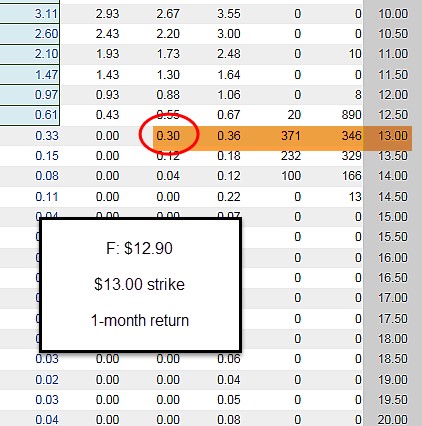 In January 2017, Ford did announce an additional dividend to be distributed in March, 2017:

Certainly, a company that has additional cash to distribute to its shareholders represents an asset when deciding if the stock is a viable candidate.

What happened since early January?

For the next 2 months Ford price shows a consolidating chart pattern (moving sideways as shown in the yellow field) until mid-March when there was a bearish moving average crossover (red arrow) when our bullish assessment would have been revisited.

Generally, we should remain structured to our system of self-investing. If we were to veer slightly and make exceptions from time-to-time, we would look to a stock that has improved technically and shows fundamental strength as did Ford in the form of a special 1-time cash dividend. Such candidates would also have to generate the premiums that meet our goals.

Global stocks declined slightly this week partially due to central bank discussions of scaling back monetary stimulus. Oil prices rebounded, rising to $45.40 from $42.65 last Friday. Volatility, as measured by the Chicago Board Options Exchange Volatility Index, ticked up to 11.18 from 10.6. This week’s economic and international news of importance: