Spin-offs and How they Impact Option Chains and Calculations

Corporate events can impact our covered call writing and put-selling positions in many ways. In today’s article we will focus on spin-offs and how to read an options chain after the event and calculate to moneyness of our options based on the specifics of that event.  Thanks to one of our members, Richard V., who shared with me this example, we have a great illustration to learn from.

Pre-spin-off contracts continue to exist and trade on the exchanges until the last one expires. They now reflect the underlying VTR1. As time moves forward, new contracts are established for both VTR and CCP based on their current market values. Eventually, only contracts with the underlyings VTR and CCP will exist but not VTR1.

What happens to volume and open interest of restructured contracts (VTR1)?

These tend to dry up because many investors would rather stay with options contracts with standard deliverables (100 shares). Also, the moneyness of these options are frequently misunderstood. For example, when CCP spins-off from VTR, the value of VTR decreases by the value of that spin-off. Many retail investors will look at the $75.00 strike with VTR trading in the $50s and not want any part of it. They are missing the associated value of the CCP shares to really understand the moneyness of that option. 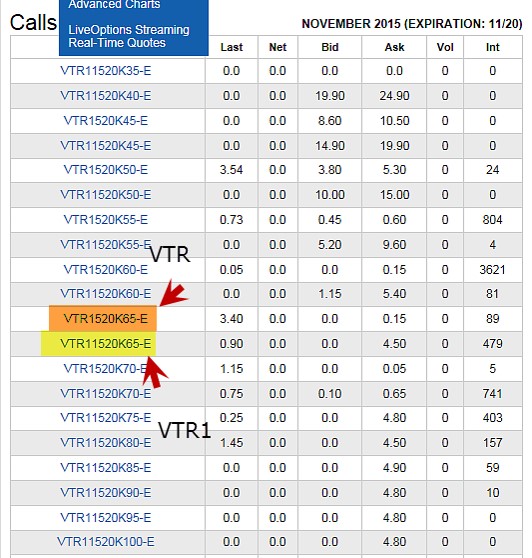 Calculating the moneyness of the VTR1 options

To determine the moneyness of the options (in-the-money, at-the-money or out-of-the-money), we must determine the value of the deliverable. Based on the structure of the spin-off, we calculate as follows:

Corporate events like mergers, acquisitions, spin-offs, one-time special cash dividends, stock splits and others frequently result in contract adjustments. This will impact information disseminated on the options chains and impact how we evaluate the moneyness of our options. It is critical to understand these changes if we find ourselves in this situation or better yet, avoid them whenever possible (with the exception of stock splits).

“Expect the Fed to raise short-term interest rates in December which is what the market expects, indicating confidence in the US economy. This will be a positive market catalyst. When this is combined with positive seasonality typically experienced in December, I project a 5% increase from Friday’s close of 2089”

“With the economy getting back on its feet, I think the markets are going to see more consumer confidence. With the potential rate hike everyone seems to be talking about though, it might suffer a minor setback. I think it will rise, but a conservative rise”

Congratulations to our winners. We will be contacting you regarding your prizes. The BCI team will also be donating $5000.00 worth of my book, Stock Investing for Students” to our military heroes via the USO. Thanks to all our members who participated in this event.

JUST ADDED:  I was recently invited to speak at The Money Show Las Vegas event on May 10th, 2016 at Caesar’s Palace.

US and European equity markets momentary calmed after the strong employment report on Friday. By day’s end, the market was down again for a rough first week of the new year. During the week, the markets were concerned about a possible devaluation of the Chinese currency and its impact on global exports and imports. Other global concerns came from the Iran/Saudi Arabia conflict, North Korea’s bomb-testing, the 12% crash in the Chinese stock market and terrorism abroad. The markets were not happy but we’ve seen this before so should we be in or out of the stock market based on this past week? The VIX is now above 26, volatile territory in my view. We each must make our own personal risk tolerance decisions…either stay on the sidelines until the market calms or trade defensively considering in-the-money calls, deep-out-of-the-money puts, ETFs, low-beta stocks, inverse ETFs, protective puts and of course, our exit strategy arsenal. All techniques are detailed in my books and DVDs. This week’s reports:
• US December non-farm payrolls rose 292,000
• Unemployment rate remains at 5.0%
• Previous employment reports were revised upward by 50,000
• The Institute for Supply Management (ISM) manufacturing index slipped to 48.2 in December, the lowest level in six years
• The non-manufacturing ISM index dipped to 55.3 in December from 55.9 in November, but held well above the neutral level of 50
• Minutes of the December meeting of the Federal Open Market Committee of the US Federal Reserve showed that policymakers approached the first rate hike in nearly a decade with caution
• December auto sales set a record with a total of 17.5 million cars and light trucks sold in 2015

BCI: Favoring deep out-of-the-money puts and in-the-money calls only. Reducing my monthly goal for initial returns to 2% – 3% to decrease volatility risk. Plan to get more aggressive when markets calm.

Click here to cancel reply.
← How to Use Weeklys and the Premium Stock Reports for Covered Call Writing During Earnings Season
Using Out-Of-The-Money Puts and In-The-Money Calls to Manage Bear Markets →