Strike price selection should be a focus when selling call and put options. With the stock market bearish and volatile at the start of 2016, this article will highlight how such choices will offer significant protection while still allowing for compelling returns. The stock I selected to demonstrate the main points is Adobe Systems, Inc., a stock that has appeared on our Premium Watch List over the years although it is currently not on that list. I chose this stock because its option returns are typical of the securities normally found on our list and because it does not report earnings during the February contracts as we enter another earnings season. 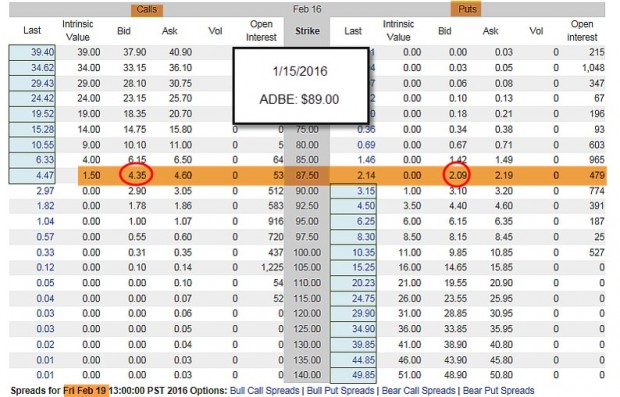 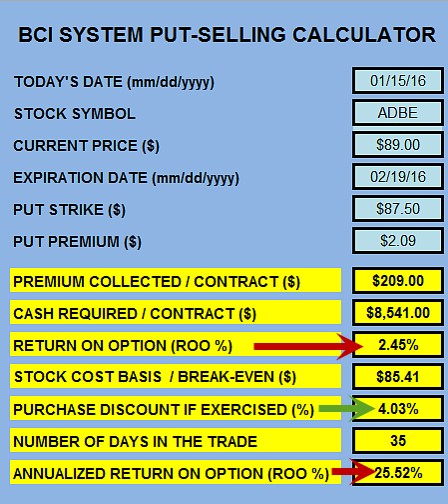 Note that if ADBE does not drop below the $87.50 strike from $89.00 by expiration, we will have generated a 2.45%, 1-month return which annualizes to 25.52%. If the stock price dips below the strike, our cost basis (breakeven) is $85.41 or a 4.03% discount from current market value. If this latter scenario occurs and the shares are put to us (we can always buy back the option if we do not want to take possession of the shares) we can then sell an in-the-money call option. For purposes of this article, we will extrapolate a bit and assume a similar return next month for the call as we would receive this month.

In this hypothetical scenario based on a real-life options chain, our 2-month breakeven protection on the put side is 4.03% and on the call side is 5.0% for a total breakeven protection of 9.03%. This means that to lose money ADBE would have to decline in value to below $80.96. If, on the other hand, the markets calm, there is opportunity to generate significant monthly returns.

Strike price selection is a powerful tool at our disposal to navigate through bear and volatile markets. Deeper-out-of-the-money puts and in-the-money calls should be given serious consideration in these market conditions. Navigating difficult markets is not for everyone. We must be comfortable and trade within our own personal risk-tolerance. That said, staying on the sidelines until the markets calm is another consideration.

JUST ADDED:  I was recently invited to speak at The Money Show Las Vegas event on May 10th, 2016 at Caesar’s Palace.

This has been the worst 10-day calendar start to an investment year in history. Global markets remained bearish this week reflecting concerns that US growth is slowing and raised questions about whether the US Federal Reserve will be able to pursue its forecast of four rates hikes in 2016. Having fallen 21% since its late December high, the Shanghai Composite Index is officially in bear market territory, defined as a drop of 20% or more from its recent high. Oil extended its decline, dropping below $30 late in the week. Slowing global growth, high supply from the U.S. and anticipation of additional supply hitting the markets when sanctions are lifted on Iran are adding to the bearish backdrop for oil and other commodities. Oil ends the week at 12-year lows and bankruptcy fears in the oil sector continue to grow. All this added up to another down week to start 2016. This week’s US economic reports:

BCI: Moving 1/3 of my stock investment portfolio into cash short-term. Favoring only deep out-of-the-money puts and in-the-money calls on active positions. Reducing my monthly goal for initial returns to 2% – 3% to decrease volatility risk. February contracts are 5-weeks long so I plan to hold off a few days into this coming week before taking new positions. Plan to get more aggressive when markets calm.