When Do We Keep a Stock that has Declined in Value?

The BCI methodology requires fundamental analysis, technical analysis and common sense screening (like minimum trading volume and avoiding earnings reports). One of the most difficult decisions retail investors face is when to sell a stock that has depreciated in value. We all deal with such decisions every contract month no matter how rigorous a screening process we have developed.

I have developed a philosophical approach to such resolutions by realizing that it is not the stock we care about but rather the cash we have invested in that security (tax issues aside). That is what our sophisticated, structured half tells us. Our weaker, emotional side tells us not to sell the stock because we haven’t as yet “realized” that loss. Which half wins out can determine the long-term success of our portfolios. This does not mean that every time there is a price decline in an underlying security we sell and replace it. In this article, we will evaluate a stock/option position shared with me by Daniel for stock Yandex N V (YNDX) in an email dated 9/23/2016.

The unrealized share loss is $1.28 ($22.23 – $20.95). The option premium was a credit for $0.95 resulting in a unrealized loss of $33.00 per contract. There is no action needed on expiration Friday since the $22.00 call option will expire worthless and shares will be retained in Daniel’s portfolio. The question is whether to sell YNDX or retain it and write another call for the October contracts. First we check the news for this stock and make sure there was no egregious news (finviz.com is an excellent site for stock news). There was not. Let’s have a look at the technical chart as screened in the BCI methodogy for the time frame in question. 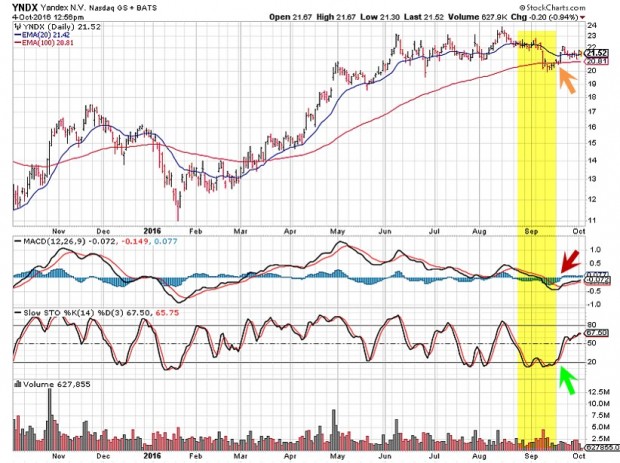 When do we hold rather than sell?

I would definitely sell if serious negative news came out about the corporation after entering the initial trade or if the chart technicals completely fell apart. Neither scenario exists in this case. My final decisions are based on two factors assuming all other system criteria are met (no earnings report in the next contract, for example):

Comparing the Charts of YNDX and the S&P 500

It is clear from these charts that the overall market pulled down the price of YNDX (corresponding red arrows) and the subsequent recoveries also lined up.

A stock that has declined in value may still be used in the next month’s contracts if it meets the following criteria:

***Thanks to Daniel for sharing this trade with us.

Alan will be interviewed on Benzinga Pre-market Radio Network regarding the best strategies to use in the current market environment.

Global declined this week due to concerns that the Trump administration’s promised pro-growth policy agenda may be negatively impacted as GOP lawmakers failed to take a vote to repeal and replace the Affordable Care Act. West Texas Intermediate crude dropped to $47.80 from $49.25 last Friday. Volatility, as measured by the Chicago Board Options Exchange Volatility Index (VIX), rose to 12.96 from 11.2. This week’s reports and international news of importance:

BCI: I am currently fully invested and have an equal number of in-the-money and out-of-the-money strikes. Waiting to see the market reaction to Friday’s non-vote on healthcare reform.

24 Responses to “When Do We Keep a Stock that has Declined in Value?”

Click here to cancel reply.
← What is the Best Time to Execute Our Trades?
Mini Options for Equities and Exchange-Traded Funds: A Failing Product →